Orrin Hatch, retiring. Hatch is the current President Pro-Tempore and the longest-serving Republican in the history of the United States Senate, having first been elected in 1976. On January 2, 2018, he announced he would not be seeking an eighth term. Former Governor of Massachusetts and 2012 Republican Nominee for President Mitt Romney is a frontrunner to replace Hatch.

Register by:
October 30
Learn About the Other Elections
[Top]

This is a representation of the Senate seats up for election by their location on the Senate floor. The highlighted seat is where Senator Hatch sits. 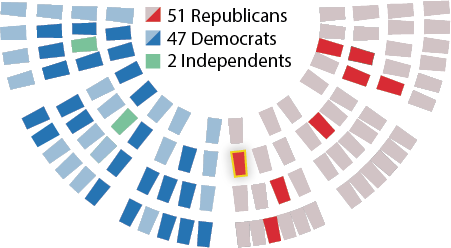