Let your voice be heard 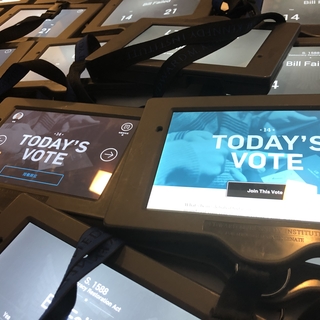 In the Today’s Vote program, visitors participate in a live floor debate on an active piece of legislation being considered by the real Senate in Washington, D.C. The simulated Senate session provides an introduction to the bill under consideration and highlights some of the Senate Chamber’s rules and traditions. As a “senator for a day,” visitors can investigate the bill using their tablets, consider live debates by the Institute’s actor “senators,” and offer their own statements on the Senate floor. Today’s Vote culminates in a live vote, tallied on the Institute’s Senate Chamber screens.

This month, vote on Senate Joint Resolution 17, which would abolish the Electoral College and replace it with the direct election of the President and Vice President by popular vote.

Don’t miss your chance to speak up and be a senator for a day. Get your tickets now.

The Today’s Vote is currently running in the Institute’s Senate Chamber for pre-scheduled groups.

This month, the Today’s Vote is S.J.Res. 17, abolishing the Electoral College.

Experience democracy firsthand through interactive exhibits, live votes, and a full-scale replica of the Senate Chamber.