Ted Cruz is seeking a second term to represent Texas. A product of the Tea Party wave of 2012, Cruz has consistently billed himself as a political outsider, and acted accordingly. He played a major role in the government shutdown of 2013 and has been critical of several members of his own party, including calling Senate Majority Leader Mitch McConnell a liar on the Senate floor. While his reelection in November is likely, changing demographics and the political energy among Democrats gives his challenger, U.S. Representative Beto O’Rourke, a chance.

Register by:
October 6
Learn About the Other Elections
[Top]

This is a representation of the Senate seats up for election by their location on the Senate floor. The highlighted seat is where Senator Cruz sits. 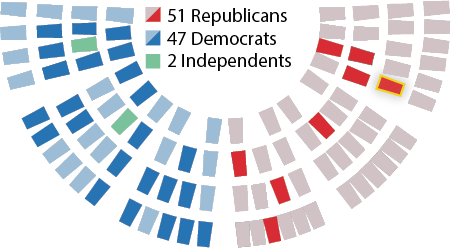