Bob Casey, two-time Senator from Pennsylvania, is facing a likely-contentious race. While Donald Trump won the state by only 44,292 votes in 2016, Pennsylvania’s Congressional districts were recently redrawn after the state courts had ruled them to be unfairly gerrymandered. This is expected to drive high Democratic turnout in November, which bodes well for Casey. He is the ranking member of the Aging Committee.

This is a representation of the Senate seats up for election by their location on the Senate floor. The highlighted seat is where Senator Casey sits. 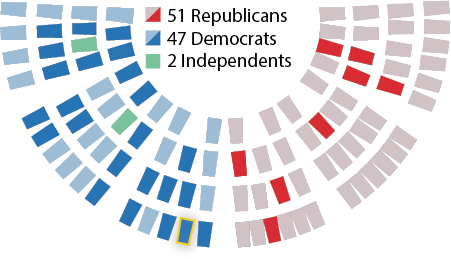