Sherrod Brown is the ranking member of the Committee of Banking, Housing, and Urban Affairs, and is seeking a third term. Brown has so far enjoyed a relatively wide lead in early 2018 polling and has stayed relatively popular in the swing state of Ohio. Despite Ohio breaking for Donald Trump in 2016, and Brown’s staunch liberal values, for now the race is ultimately Brown’s to lose.

This is a representation of the Senate seats up for election by their location on the Senate floor. The highlighted seat is where Senator Brown sits. 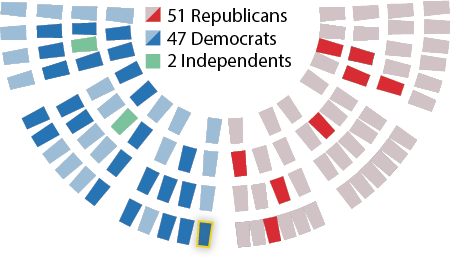