Heidi Heitkamp is seeking a second term as Senator of North Dakota in what is expected to be one of the most contentious races this November. While Republicans were initially concerned about President Trump potentially working with Heitkamp, he has recently stated that he will campaign for her opponent, Kevin Kramer. Donald Trump won North Dakota by nearly 36 points in 2016, so it will be an uphill battle for Heitkamp to retain her seat, but she will undoubtedly be a Senator Democrats are looking to protect.

Register by:
November 6
Learn About the Other Elections
[Top]

This is a representation of the Senate seats up for election by their location on the Senate floor. The highlighted seat is where Senator Heitkamp sits. 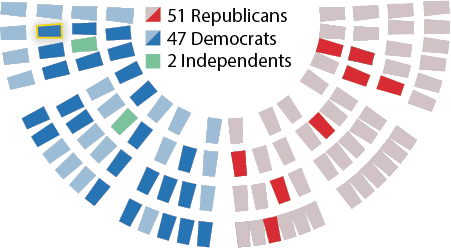