Kirsten Gillibrand, two-time Senator from New York, is seeking a third term. A staunch liberal and major opponent to Donald Trump, she was elected to the Senate following Hillary Clinton’s appointment as Barack Obama’s Secretary of State. Gillibrand was re-elected in 2012 with 72% support, the highest margin of victory for any statewide politician in New York history. As such, she is almost assured to win re-election and set up a potential 2020 bid for the Presidency.

Register by:
October 12
Learn About the Other Elections
[Top]

This is a representation of the Senate seats up for election by their location on the Senate floor. The highlighted seat is where Senator Gillibrand sits. 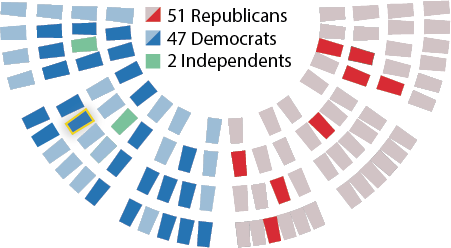