Martin Heinrich is seeking a second term as Senator of New Mexico. Heinrich was elected for his first term in 2012 after the seat was vacated by Jeff Bingaman, a thirty-year incumbent. Looking to carry on Democratic possession of New Mexico, Heinrich won a surprisingly close election in 2012 by only 6 points. However, Heinrich is unlikely to have any serious threats this election cycle and is expected to retain his seat.

This is a representation of the Senate seats up for election by their location on the Senate floor. The highlighted seat is where Senator Heinrich sits. 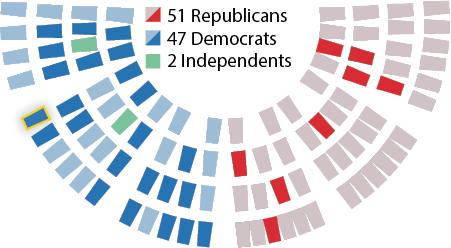