Robert Menendez is seeking a third term representing New Jersey. Having previously served 13 years in the House of Representatives, Menendez easily won election to the Senate in 2006 and 2012. In 2015, Menendez was indicted by the Justice Department for bribery and fraud. The judge declared a mistrial in November 2017 and the Justice Department dropped the charges two months later. Still, Menendez comfortably won the New Jersey Democratic primary. Given the state’s blue streak, he will likely be reelected in November.

Register by:
October 16
Learn About the Other Elections
[Top]

This is a representation of the Senate seats up for election by their location on the Senate floor. The highlighted seat is where Senator Menendez sits. 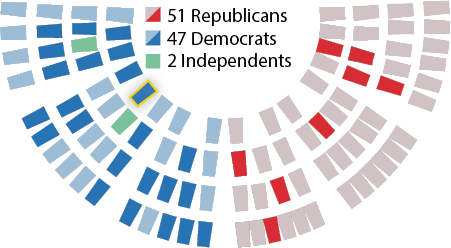