Dean Heller, seeking a second term to represent Nevada. Heller served in the House of Representatives for 6 years before winning election to the Senate in 2012. Heller is the only Republican incumbent whose state went for Hillary Clinton in 2016, albeit by only 2 points. He is expected to face a difficult campaign from his Democratic challenger, U.S. Representative Jacky Rosen.

Register by:
October 18
Learn About the Other Elections
[Top]

This is a representation of the Senate seats up for election by their location on the Senate floor. The highlighted seat is where Senator Heller sits. 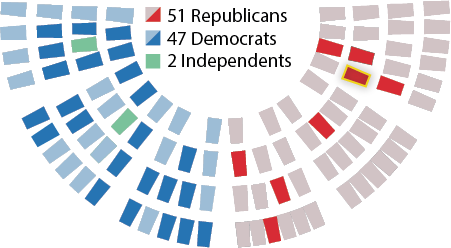