Deb Fischer, current Senator from Nebraska, is seeking a second term. Having first won election to the Senate in 2012, Fischer is a strong conservative in a state that went for Donald Trump by 25 points. Fischer will face Lincoln City Councilwoman Jane Raybould in November and is expected to safely retain her seat.

Register by:
October 19
Learn About the Other Elections
[Top]

This is a representation of the Senate seats up for election by their location on the Senate floor. The highlighted seat is where Senator Fischer sits. 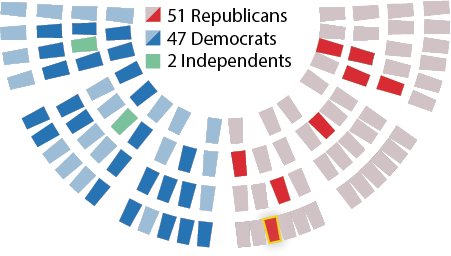