Seeking a third term, Jon Tester is hopes to continue to represent Montanans in the Senate, despite their 20 plus point support of Donald Trump in the 2016 presidential election. As ranking member of the Senate Veterans’ Affairs Committee, Tester sunk President Trump’s nominee to head the Department of Veterans Affairs, Ronny Jackson, after he released allegations of misconduct concerning Jackson. Tester will face Montana State Auditor Matt Rosendale in November.

This is a representation of the Senate seats up for election by their location on the Senate floor. The highlighted seat is where Senator Tester sits. 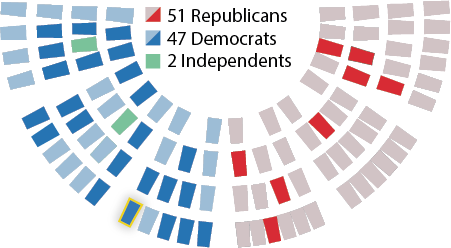