Claire McCaskill is seeking a third term representing the state of Missouri. Winning her first Senate election by less than 2 points in 2006, McCaskill was comfortably reelected by Missourians in 2012. However, Donald Trump won Missouri by nearly 20 points in 2016 and the state has become more conservative. If she is to keep her seat, McCaskill will have to retain her base, as well as attract many Missourians who voted for Trump in 2016. This race will be close.

Register by:
October 10
Learn About the Other Elections
[Top]

This is a representation of the Senate seats up for election by their location on the Senate floor. The highlighted seat is where Senator McCaskill sits. 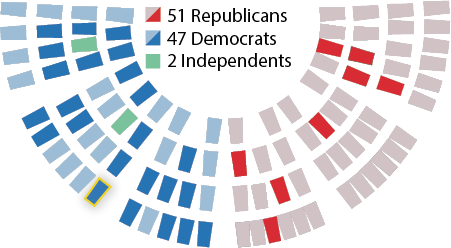