Cindy Hyde-Smith is seeking her first full term. While serving as Mississippi Commissioner of Agriculture and Commerce, Hyde-Smith was appointed to fill the remainder of Senator Thad Cochran’s seat, following his resignation in March due to health concerns. Hyde-Smith announced that she would seek election in her own right in November. For this special election, if no candidate receives at least 50% of the vote, a runoff election between the top two candidates will be held three weeks later on November 27, 2018. Early polling shows no candidate approaching the 50% threshold, making a runoff likely.

This is a representation of the Senate seats up for election by their location on the Senate floor. The highlighted seat is where Senator Hyde Smith sits. 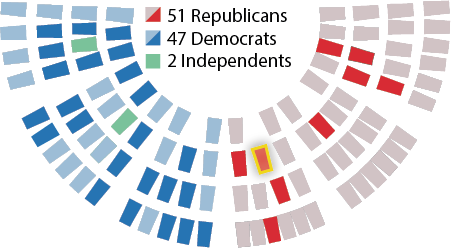