Roger Wicker, representing Mississippi, is seeking a third term. After serving in the House of Representatives for 12 years, Wicker was appointed to fill the seat of retiring Senator Trent Lott in 2007. Wicker easily won a special election in 2008 and reelection in 2012. Mississippi is a deep-red state that went for Donald Trump by 17 points in 2016. He is widely expect to retain his seat in November.

This is a representation of the Senate seats up for election by their location on the Senate floor. The highlighted seat is where Senator Wicker sits. 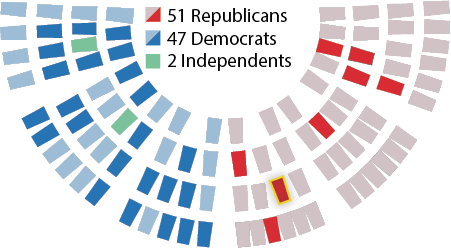