Tina Smith is seeking her first full term. While serving as Lieutenant Governor of Minnesota, Smith was appointed to fill the vacancy left following Senator Al Franken’s resignation in January amid allegations of sexual misconduct. Smith announced that she would seek election in her own right in November. With the support of powerful members of Minnesota’s Democratic Party and the absence of a strong Republican opponent on the horizon, Smith stands a good chance of being elected. If she wins, she will have to run for reelection in 2020 to serve a full six-year term.

This is a representation of the Senate seats up for election by their location on the Senate floor. The highlighted seat is where Senator Smith sits. 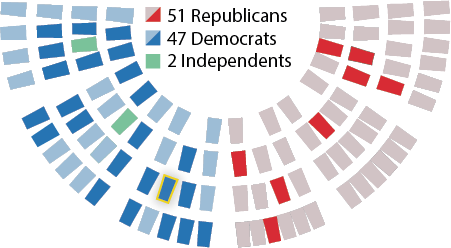