Elizabeth Warren, Senator from Massachusetts, is seeking a second term. After defeating incumbent Scott Brown in 2012, Warren established herself as a strong member of the progressive wing of the Democratic Party. Running unopposed for her party’s nomination this year, Warren will likely defeat whoever comes out of the Republican Party primary.

Register by:
October 17
Learn About the Other Elections
[Top]

This is a representation of the Senate seats up for election by their location on the Senate floor. The highlighted seat is where Senator Warren sits. 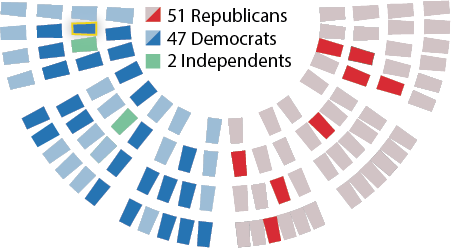