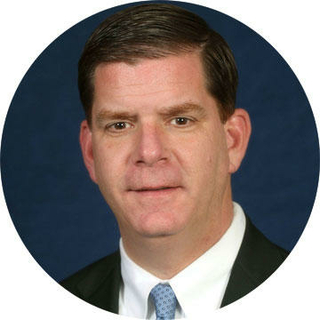 Martin J. Walsh, a lifelong champion of working people, serves as the 29th United States Secretary of Labor. Born and raised in the Dorchester neighborhood of Boston by immigrant parents from Ireland, Walsh first made his mark as a labor leader. After following his father into Laborers Local 223 in Boston, he rose to become president of the local union and then, from 2011-2013, head of the Metro Boston Building and Construction Trades Council. In 1997, he was elected to serve as State Representative for one of the most diverse districts in Massachusetts, where he focused on creating good jobs, protecting workers’ rights, expanding mental health treatment, and investing in public transit. While working full-time as a legislator, he returned to school to earn a degree in Political Science at Boston College. In 2013, he was elected Mayor of Boston, a position he held until joining the Biden-Harris Administration. As Mayor, he led the creation of 140,000 jobs, established universal access to pre-kindergarten, secured free community college for low-income students, set records for creating affordable housing, and led the city through the first year of the COVID-19 pandemic. As Labor Secretary, Walsh continues his passion for lifting up working people. He has traveled the country to promote good jobs and equitable career pathways and serves as vice chair of the White House Task Force on Worker Organizing and Empowerment. Walsh is a survivor of childhood cancer and is a proud member of the recovery community who has worked to expand addiction treatment throughout his career.