Angus King is seeking a second term as Maine’s junior Senator. King served as Governor of Maine from 1995 to 2003. He won a landslide victory when he ran for the Senate in 2012. Though he is an Independent, he caucuses with the Democratic Party. A historically Republican state, Maine nevertheless went for Barack Obama in 2008 and 2012, and Hillary Clinton in 2016. King is expected to win reelection in November.

Register by:
October 16
Learn About the Other Elections
[Top]

This is a representation of the Senate seats up for election by their location on the Senate floor. The highlighted seat is where Senator King sits. 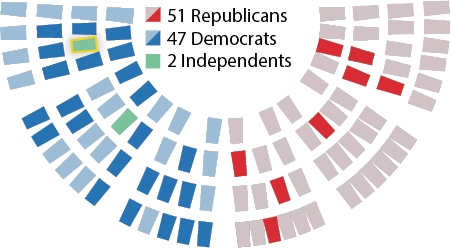