Joe Donnelly, seeking a second term, faces a tough road forward in the election; Donnelly is a Democrat in a state that Donald Trump won by nearly 20 points in 2016. Indiana has become an increasingly safe Republican stronghold, especially after the defeat of Democratic candidate Evan Bayh in 2016. Donnelly will face former State Representative Mike Braun in what will likely be one of the closest races of 2018.

This is a representation of the Senate seats up for election by their location on the Senate floor. The highlighted seat is where Senator Donnelly sits. 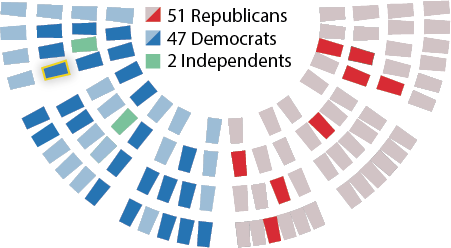