Christopher Murphy, representing Connecticut, is seeking a third term. After winning a tough reelection campaign in 2012, Murphy has grown his national profile through his outspoken commitment to the issue of gun control. His state went for Clinton by nearly 15 points in 2016, so he is very likely to win reelection in November.

Register by:
October 30
Learn About the Other Elections
[Top]

This is a representation of the Senate seats up for election by their location on the Senate floor. The highlighted seat is where Senator Murphy sits. 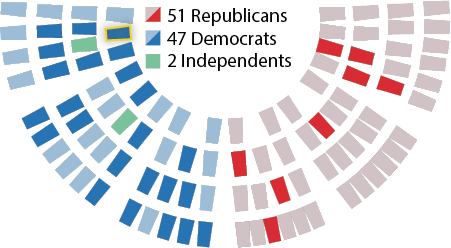