Dianne Feinstein, ranking member of the Committee on the Judiciary, is seeking a fifth full term. Because of the way that California primaries work, the top two candidates in the primary, regardless of party affiliation, advance to the general election. As such, California will remain in Democratic hands after November, as the election is between Dianne Feinstein and Kevin De Leon. De Leon has mounted a progressive challenge to Feinstein, but as a popular 26 year incumbent, it is unlikely that she will be voted out of her seat.

Register by:
October 22
Learn About the Other Elections
[Top]

This is a representation of the Senate seats up for election by their location on the Senate floor. The highlighted seat is where Senator Feinstein sits. 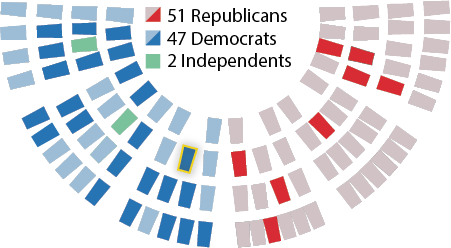