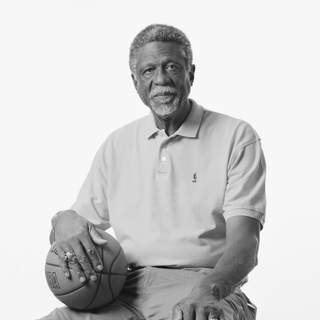 Bill Russell has lived a lifetime of achievements. As a basketball legend, a leader on and off the court, and as a man, Bill defines the word “champion”. HBO Sports hailed Bill as “The Greatest Winner of the 20th Century” while Sports Illustrated deemed Russell as “The Greatest Team Player on the Greatest Team of All Time”. Bill is the ultimate winner, having won an unprecedented eighteen championships in twenty-one years of playing basketball.

William Felton Russell was born on February 12, 1934 in Monroe, Louisiana and moved to Oakland, California at age 9. Along his path to the NBA, he helped win three championships for McClymonds High School, two NCAA Championships in 1955 and 1956 for the University of San Francisco, and was named the NCAA Tournament Most Outstanding Player in 1955. Additionally, he proudly captained the U.S. Olympic basketball team, winning the gold medal in the 1956 Olympics in Melbourne, Australia.

As Captain of the legendary Boston Celtics, Bill led his team to eleven NBA Championships in thirteen years – eight of them in a row, the longest streak of consecutive championships in U.S. sports history. As the heart and soul of the Celtics dynasty, Bill revolutionized the game of basketball by transforming how teams played defense.

Bill’s accomplishments on the court are almost endless yet it’s his achievements and work off the court that made him a true winner and the ultimate team player. He knows the qualities and values it takes for a team, any team, to win. In 1967, Bill broke the color barrier, becoming the first African-American Coach in American Major League sports. He has been an aggressive advocate for civil rights and diversity and has served as a Global Ambassador of Basketball by partnering with the NBA and the U.S. State Department to bring the sport to Africa. On behalf of the NBA and his country, Bill has visited, and hosted clinics, in over 50 countries, on 6 continents, sharing his love for the sport. He was the first NBA player to visit Africa in 1959 and he first visited China in 1979. Bill aided in making the NBA the international powerhouse it is today and was awarded the NBA’s First Civil Rights Award. Bill has mastered the “art of winning”, finding ways to win in sports, business and in life.

As an award-winning author, and in-demand public speaker, Bill has been able to share his insights on leadership, success, teamwork and winning, and demonstrate why the name Bill Russell is synonymous with those qualities. In his third bestseller, Russell Rules, Bill says “Finding a way to win in life and business has little to do with your station in life. There are opportunities everywhere, and you must take advantage of them.” Bill Russell has become an American Icon but really, he’s an American original.