Jeff Flake, retiring. After having served in the House of Representatives for 10 years, Flake won election to his first term in the Senate in 2012. On October 24, 2017, Flake announced on the Senate floor that he would not be seeking reelection in 2018. Flake’s speech was also noted for its indictment of the Republican Party and President Trump. Arizona went for Trump by less than 4 points in 2016, so Flake’s retirement leaves an opening for Democrats to win the seat in November.

This is a representation of the Senate seats up for election by their location on the Senate floor. The highlighted seat is where Senator Flake sits. 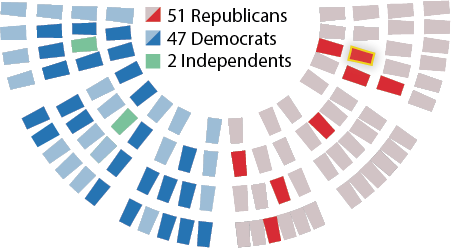