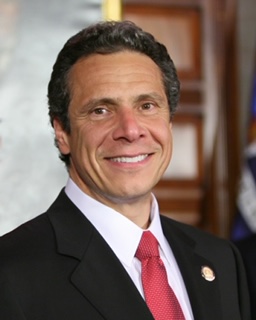 Andrew M. Cuomo is the 56th Governor of New York, having assumed office on January 1, 2011.

As Governor, Cuomo has fought for social, racial and economic justice for all New Yorkers. Under his leadership, New York passed marriage equality, a $15 minimum wage, the strongest paid family leave program in the nation, the strongest gun safety laws in the nation, equal rights for women, greater protections for immigrants, the largest investment in education in state history, landmark election reforms, and a first-in-the-nation Green New Deal for New York. He cut taxes for the middle class, implemented a permanent 2 percent property tax cap, put more New Yorkers to work than ever before, and became the first state in the nation to offer free college tuition for middle-class families. He got the state building again – taking on projects all across the state that had been stalled for decades, and using union labor every step of the way. And he led the during the COVID-19 crisis, steering New York from the highest infection rate in the country to the lowest.

Governor Cuomo is the Dean of the nation’s Democratic Governors, and currently serves as Chairman of the National Governors Association.

Prior to his election as Governor, Cuomo served as the 64th Attorney General of New York, where he fought discrimination in rental apartments, challenged corporate abuse of the middle class, and took on the big banks that were squandering billions of dollars in bail-out money.

From 1997-2001, Cuomo served as the 11th United States Secretary of Housing and Urban Development under President Bill Clinton, where he transformed the agency from a wasteful and inefficient bureaucracy to an effective driver of economic development and housing opportunities. His leadership as Secretary was a continuation of his lifelong fight to help the neediest and address homelessness, one of the most desperate situations of the time. Prior to joining HUD, Cuomo founded and led the Housing Enterprise for the Less Privileged (HELP), a not-for-profit that set a national model for serving the homeless, and chaired the New York City Homeless Commission during Mayor David Dinkins’ administration.

Governor Cuomo’s lifetime of public service began after he graduated from law school, when he served as campaign manager and headed the Transition Committee for then-Governor-Elect Mario Cuomo in 1982. Working as an advisor to the Governor – while taking a salary of $1 a year – instilled in Cuomo the belief that government is the vehicle to bring about change, do justice, and make progress happen.

Governor Cuomo is a graduate of Fordham University and Albany Law School, and the proud father of three girls, Mariah, Cara, and Michaela.