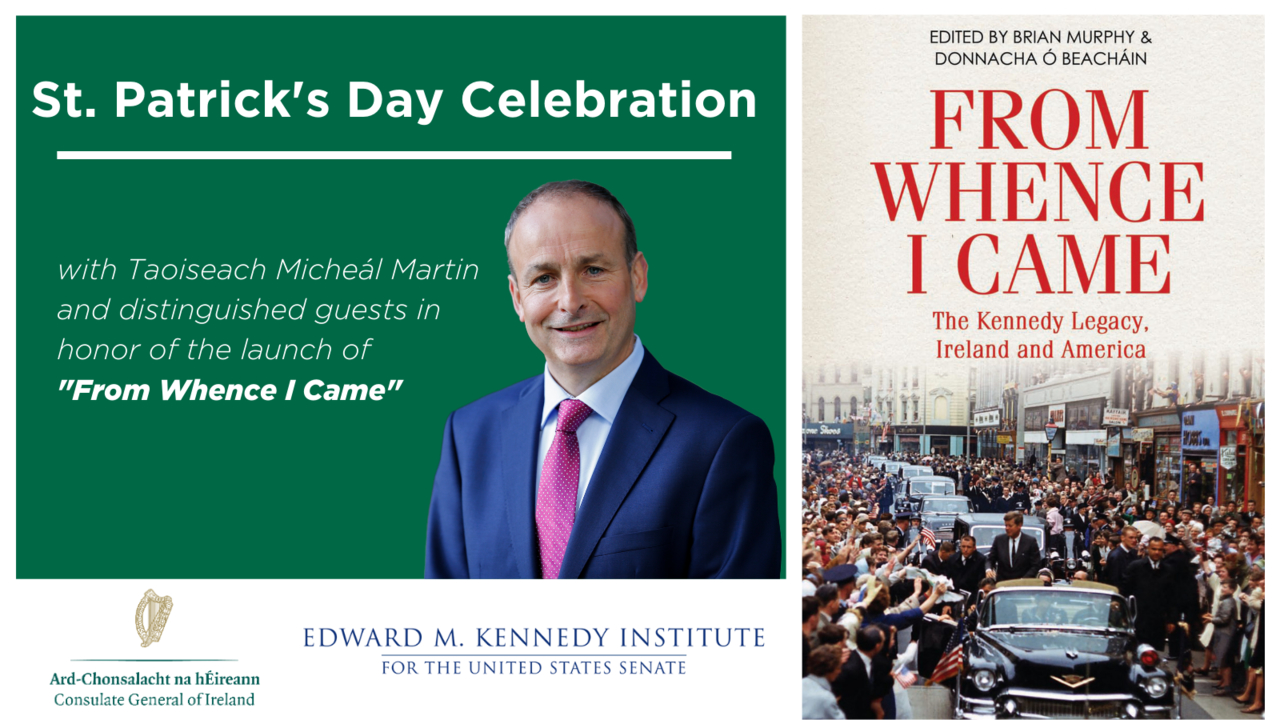 On Monday, March 15, the Edward M. Kennedy Institute for the United States Senate and Consulate General of Ireland in Boston convened for a virtual 2021 St. Patrick’s Day celebration with honored guest Taoiseach Micheál Martin, the leader of the Government of Ireland.

The lively and engaging program honored the 40th anniversary of the founding of the Friends of Ireland in Congress by Senator Edward M. Kennedy and others, and celebrated the launch of “From Whence I Came: The Kennedy Legacy, Ireland and America,” a new collection of essays edited by Brian Murphy and Donnacha Ó Beacháin.

The St. Patrick’s Day celebration featured a conversation between Taoiseach Micheál Martin and Dr. Robert Mauro, Executive Director of the Irish Institute at Boston College, on the current state of Irish affairs and Senator Edward M. Kennedy’s pivotal role in Ireland-U.S. relations and establishment of the Friends of Ireland Caucus. “Through his decades-long tenure in the Senate, Senator Kennedy was instrumental in instigating the US government’s active involvement in the Irish peace process, working closely with peacemakers, like the late John Hume, and engaging fellow members of Congress on Irish issues,” said the Taoiseach. “The work of The Friends also remains vitally important to this day. Members of the Friends … have been an important voice in seeking to protect the hard won gains of the good fight: an agreement from potential disruptions caused by Britain’s departure from the European Union.”

The second part of the program included a panel discussion on the rich legacy of the Kennedy family’s connection with Ireland featuring Dr. Mauro and The Honorable Richard Neal, Chairman of the U.S. House Ways and Means Committee; The Honorable Joe Kennedy III, former Massachusetts Congressman; Ambassador Samantha Power, former United States Ambassador to the United Nations and Professor of Practice, Harvard Kennedy School and Harvard Law School; and Dr. Alison Meagher, Deputy Consul General of Ireland in Shanghai. Much of the conversation focused on the power of storytelling to strengthen geopolitical connections and change.

“One of my great friends in my professional, political, and personal life was Ted Kennedy,” reflected Congressman Neal. “I thought that the measurement that he brought to legislative achievement is what we all should honor. I understand the role of creating a narrative, but Teddy’s great gift was actually changing lives through legislation.” On what parts of his family’s Irish heritage he takes with him as a political leader, former Massachusetts Congressman Joe Kennedy III spoke of the immigrant story that founded his family’s roots in America: “It’s about the fact that a distant relative of mine left Ireland with nothing in the midst of a famine, and a couple generations later, his great-great-grandson was President of the United States.”

Dr. Alison Meagher, who wrote the chapter on Senator Ted Kennedy, “The Distant Peacemaker” in “From Whence I Came,” detailed Senator Kennedy’s relationship with the late John Hume as the catalyst for what became the Friends of Ireland Caucus and Senator Kennedy’s deep relationship with Ireland affairs: “The great reeducation of Senator Ted Kennedy took place under the tutelage of John Hume, and in 1976 Kennedy organized for Hume to have a fellowship at the Center for International Studies at Harvard University …That, I would argue, was such a crucial step towards US involvement in Ireland [and] Northern Ireland.”