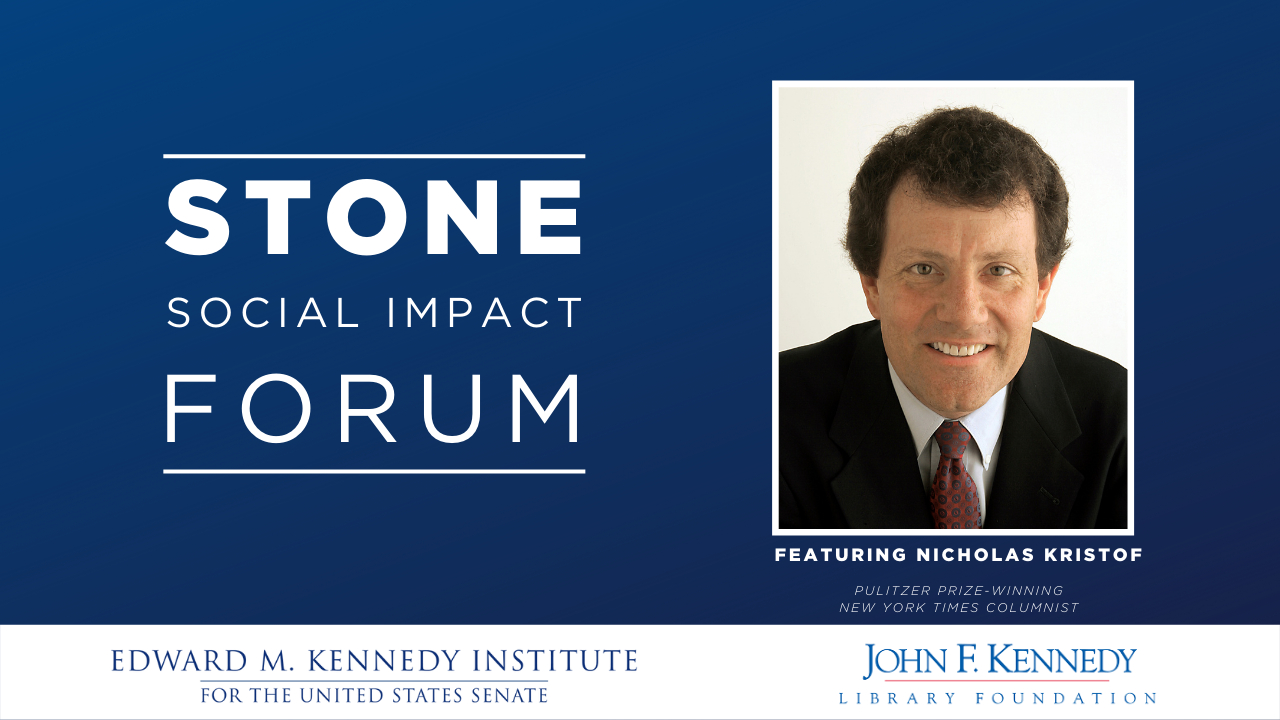 Nicholas Kristof, Pulitzer Prize-Winning New York Times columnist and world-renowned journalist, will headline the virtual Fall 2021 Stone Social Impact Forum. Known for his reporting on human rights and giving a voice to the voiceless around the world, Mr. Kristof will share his experiences and discuss his most recent publication, “Tightrope: Americans Reaching for Hope” (2020). He will join in conversation with his wife and Pulitzer Prize-Winning journalist and business executive, Sheryl WuDunn.

Coauthored with his wife, Sheryl WuDunn, “Tightrope” issues a plea to address the crisis in working-class America while also focusing on solutions to mend a half-century of governmental failure. They tell this story through the lives of people with whom Kristof grew up – about a quarter of the children on his old school bus died in adulthood from drugs, alcohol, suicide, or reckless accidents. While these particular stories unfolded in Oregon, they are representative of many places across the country.

Mr. Kristof has lived on four continents, reported on six, and traveled to more than 150 countries. During his travels, he has experienced wars, confronted warlords, caught malaria, and survived a plane crash. In 1990 Kristof and WuDunn, then also a New York Times journalist, became the first husband-wife team to win a Pulitzer Prize for journalism for their coverage of China’s Tiananmen Square democracy movement. Kristof won his second Pulitzer in 2006 for what the judges called “his graphic, deeply reported columns that, at personal risk, focused attention on genocide in Darfur and that gave voice to the voiceless in other parts of the world.” Kristof and WuDunn have written five best-selling books, and he has won innumerable awards and praise from people around the world.

Honoring bold civic change agents who tackle inequality and inspire all people to be civically active, the Stone Social Impact Forum is a joint initiative of the Kennedy Institute and the John F. Kennedy Library Foundation, generously supported by the James M. and Cathleen D. Stone Foundation.

ABOUT THE EDWARD M. KENNEDY INSTITUTE FOR THE UNITED STATES SENATE

The Edward M. Kennedy Institute for the United States Senate is dedicated to educating the public about the important role of the Senate in our government, encouraging participatory democracy, invigorating civil discourse, and inspiring the next generation of citizens and leaders to engage in the civic life of their communities.

All public programs will be conducted via Zoom webinar until further notice. Webinar log-in instructions will be sent upon registration via email. Please direct all questions to programs@emkinstitute.org.