Kennedy and Hume: A Journey of Peace in Northern Ireland 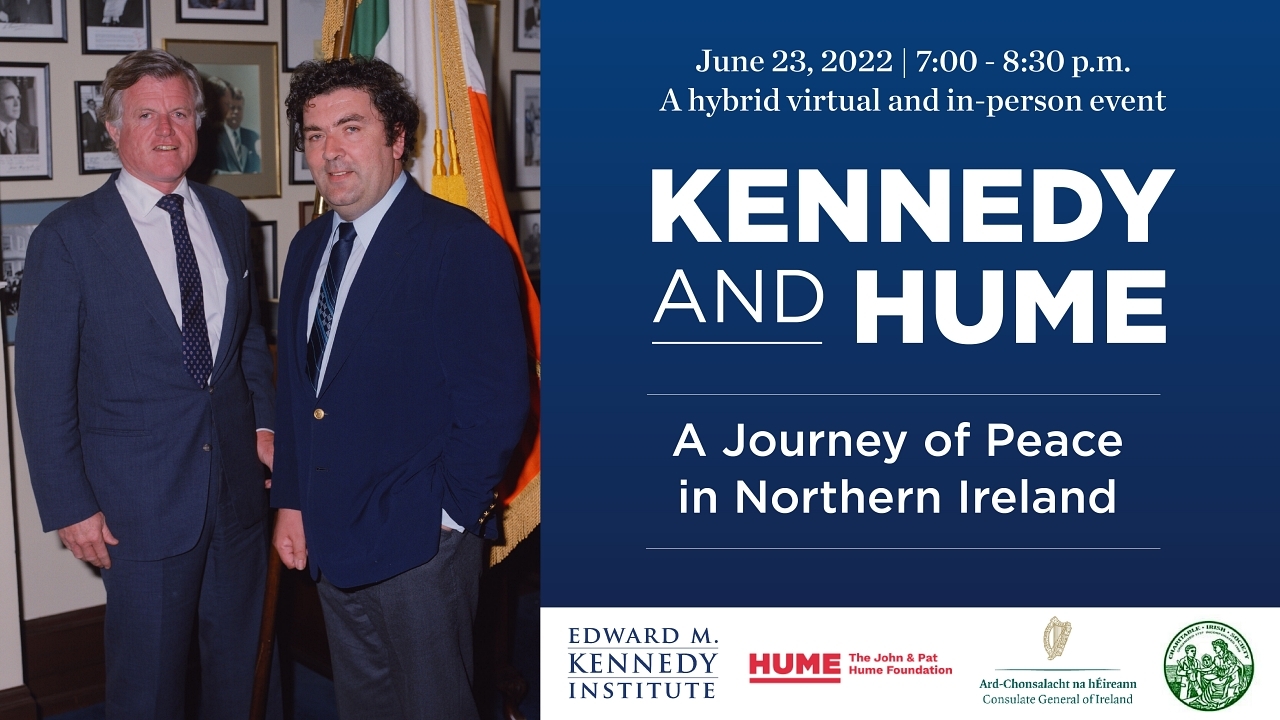 On Thursday, June 23, the Kennedy Institute, John & Pat Hume Foundation, and the Consulate General of Ireland in Boston hosted a conversation commemorating the 50th anniversary of the first meeting between Senator Edward M. Kennedy and John Hume, and its profound impact on finding a path to peace in Northern Ireland. The event featured a panel of ambassadors and elected officials, and explored how the legacy of this powerful relationship still resonates today.

The conversation centered on the similarities between the two men that led to their extended friendship and commitment towards peace in Northern Ireland. “Tonight is a tribute about the bond between two great figures of peace,” said Ambassador Soderberg. “And they just loved being together. They loved a good song, a good jab, a good joke. And they just loved each other’s company.”

“Senator Kennedy sought advice from someone at the heart of the troubles in Northern Ireland – and that person he met was John Hume,” recalled Dr. Seán Farren. “And it wasn’t a one-off briefing. It was a discussion and conversation that evolved into a friendship between the two of them.”

Discussing what made John Hume so qualified to lead this work of finding common ground and peace, Ambassador Soderberg stated: “When you want to shift the paradigm and get to ‘Yes’ in a peace process, you have to understand what both sides need. John understood that people needed jobs. John Hume’s principles of the rights of people and not territory laid the foundation for the Good Friday Agreement. The bond John Hume and Ted Kennedy forged enabled them to move Prime Ministers, Presidents, and political leaders to forge peace.”

“John Hume turned the clock forward in the peace process,” Ambassador Mulhall agreed. “He helped create an agreement that showed the character of Northern Ireland.”

“John talked about each of us being different and each of us deserving respect as individuals,” added Dr. Seán Farren. “Spilling our sweat and not our blood. And working with Senator Kennedy and others to impress on the British government the need for power-sharing and partnerships.”

When asked about how the Good Friday Agreement resonates today, Ambassador Soderberg and Ambassador Mulhall shared the same sentiment: “Leaders today would be well advised to put those principles forward once again to preserve the Good Friday Agreement,” said Ambassador Soderberg. “Brexit is a very unwelcome visitor to the Northern Ireland peace process,” said Ambassador Mulhall. “We have to get around this, and we need support from our friends in America to navigate this rough water.”