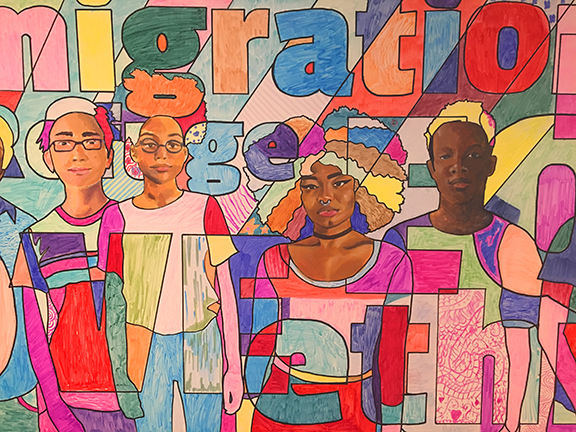 The Edward M. Kennedy Institute is host to the Artists for Humanity’s interactive and site-specific mural Immerica. It hangs in the Institute’s west corridor, across from the cafe.

The faces depicted in the mural are participants in Artists for Humanity, a nonprofit organization that employs Boston’s young people to provide creative services to businesses.

The young people shown represent many ethnicities and cultures and speak multiple languages. Some have immigrated to the United States from other nations. More than anything, they are individuals. Uniquely American, they have their own proud stories and dreams of a bright future. Together they represent one of the most beautiful things about America – its diversity.

The mural artists invited visitors to the Institute to become part of this image. Only the figures’ faces were filled in when the mural was installed at the Edward M. Kennedy Institute in May of 2017. Visitors added color to the evolving piece over time. With each addition, the mural evolved into a blended expression of ethnicities and cultural backgrounds. Immerica represents the future dreams and individuality of the artists as well as the Institute’s visitors.