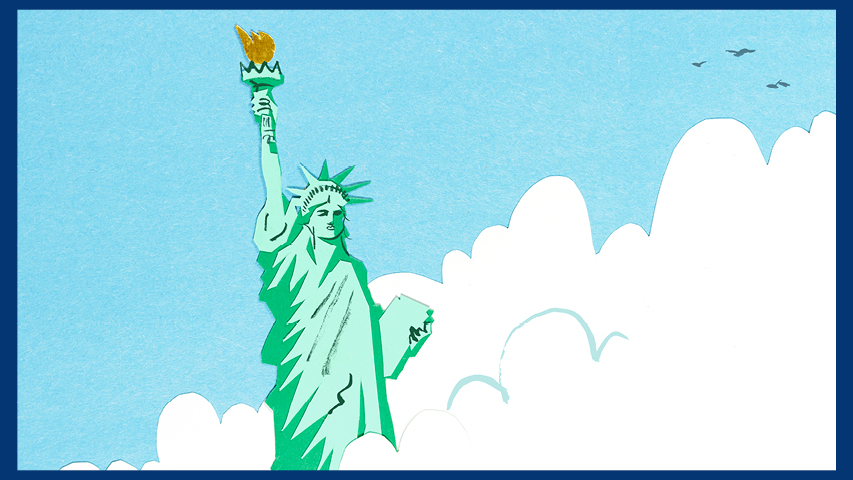 BOSTON – Today, the Edward M. Kennedy Institute for the United States Senate announced the launch of a new civic education program for the kindergarten through second grade school audience. Welcoming Words introduces young students to an important United States symbol – the Statue of Liberty – and the role she plays as welcomer-in-chief to immigrants.

The Welcoming Words program features an interactive tour with key stops of the Edward M. Kennedy Institute visitor experience including a visit to the Institute’s full-scale replica of the United States Senate Chamber. The tour is followed by a reading and discussion of the nonfiction children’s book Her Right Foot by Dave Eggers, and the opportunity for participants to create art that represents their own symbols of welcome.

“All of us at the Edward M. Kennedy Institute are pleased to launch this program specially designed for kindergarten and elementary audiences,” said Amy Munslow, education manager. “The blending together of arts and civics, together with the powerful messages of diversity and acceptance contained in Dave Eggers’s book, helps create a dynamic and positive experiential environment for our visiting students.”

Staff at the Edward M. Kennedy Institute first piloted a version of the program early in 2019 for the Girl Scouts of Eastern Massachusetts. The Institute team continued to refine the program and mapped its activities to educational standards contained within Massachusetts curriculum frameworks in preparation for making Welcoming Words available as an educational offering that can be booked in advance.

Welcoming Words can accommodate groups of up to 50 students. It is one of several educational experiences that the Edward M. Kennedy Institute offers to school audiences.