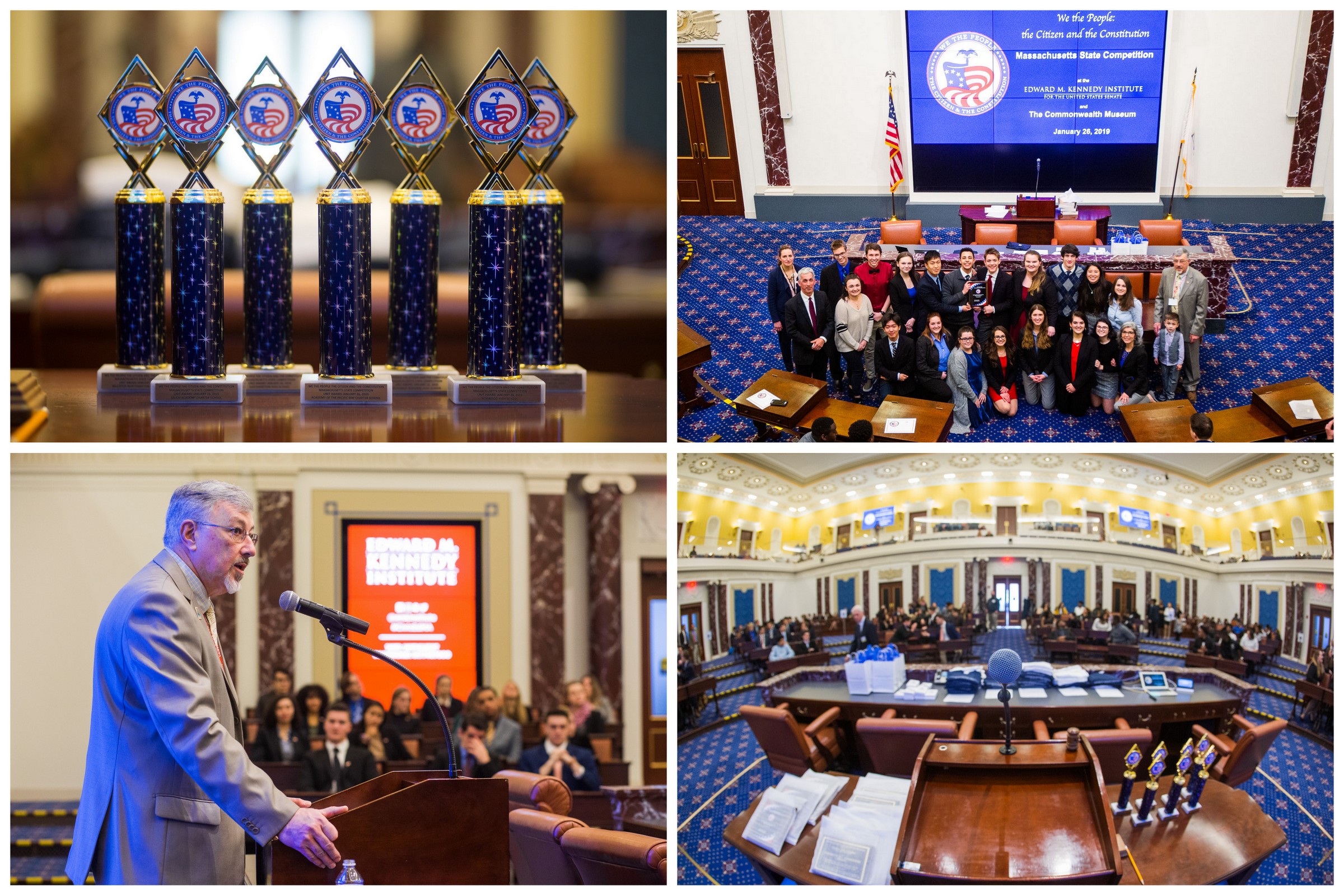 BOSTON – On Saturday, January 26, nearly 200 students from seven Massachusetts high schools participated in the We the People State Finals at the Edward M. Kennedy Institute for the United Sates Senate and the Commonwealth Museum. Students spent the morning and the afternoon in competitive civic education simulated congressional hearings where they considered tenets of the U.S. Constitution and contemporary challenges to democracy. The program is organized by the Massachusetts Center for Civic Education (MACCE), a nonprofit dedicated to promoting civic education in communities and schools across the Commonwealth.

“The Institute is delighted to collaborate with the Massachusetts Center for Civic Education and provide a venue for students to share their impressive knowledge of the United States Constitution and American democratic principles,” said Mary K. Grant, Ph.D., president of the Edward M. Kennedy Institute. “We are also inspired by the students’ passion for learning and enthusiasm for tackling tough Constitutional questions. Thank you to the judges, instructors, and volunteers for leading by example on an important aspect of civic participation.”

During Saturday’s We the People competition, participants demonstrated their knowledge of government and the U.S. Constitution while addressing questions from the historical and philosophical foundations of the American political system as well as current-day issues.

Easthampton High School, the winning team at Saturday’s competition, will participate in the 32nd We the People National Finals in Washington, D.C. from April 26-29 at the National Conference Center. The second-place winner was the Academy of the Pacific Rim from Hyde Park, Boston, and the third-place winner was the Williston Northampton School from Easthampton, Massachusetts.

“Civic education is essential at every age,” said Roger Desrosiers, president of the MACCE. “This competition is the perfect chance to offer young people an active and realistic application of their constitutional studies. Congratulations to Easthampton students on their first-place finish at the Kennedy Institute. I look forward to following the team’s progress at the national competition in Washington, D.C. My congratulations are extended to every student who participated in We the People; each of them is prepared to be a better citizen and member of society.”

In January 2018, the Institute launched its partnership with the MACCE as high school students came to Columbia Point and took part in the 2018 statewide We the People competition. In April of last year, middle school students took part in a first-ever civic education showcase at the Institute which included a similar hearing process. Through the Institute’s partnership with the MACCE, the Institute also hosts professional development workshops for educators and adult learning opportunities that focus on the United States government.

The Edward M. Kennedy Institute for the United States Senate is a nonprofit organization in Boston envisioned by the late Senator Ted Kennedy; it is dedicated to educating the public about the important role of the Senate in government, encouraging civic participation, and invigorating civil discourse. Through exhibits, educational offerings, and topical programs, the Institute engages students and visitors in a conversation about the essential role each person plays in our democracy and in our society. Learn more via emkinstitute.org.

Students and visitors to explore how their government works through legislation at the Edward M. Kennedy Institute