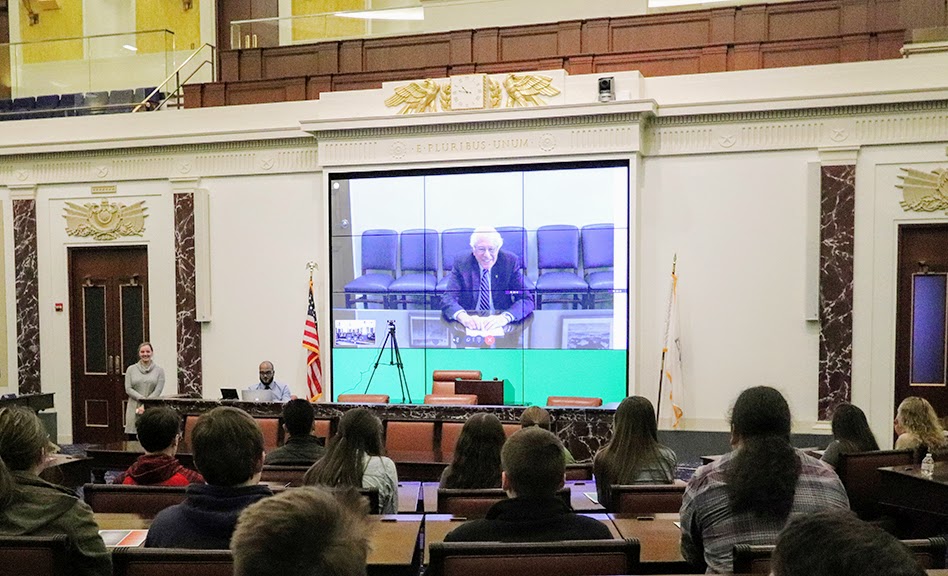 BOSTON – The Edward M. Kennedy Institute for the United States Senate hosted more than 80 students from four schools in the fourth edition of Vermont Day, an organizational partnership with the office of Senator Bernie Sanders that began in June 2017. While at the Kennedy Institute, students considered current legislation and had a hands-on experience learning about how the congressional process functions.

Senator Sanders spoke to attendees through a video conference call broadcast in the Institute’s full-scale replica of the United States Senate Chamber.

The Vermont students tackled a piece of legislation that Senator Sanders introduced earlier this session in Congress. In the program, they considered S. 102, the Prescription Drug Price Act of 2019.

“The Kennedy Institute doesn’t just give students a better understanding about how the Senate works, it also helps them to think critically and debate really big issues in a respectful and civil manner,” said Senator Sanders, who is a member of the Senate education committee. “The Institute is helping prepare the youth of today to tackle the challenges of tomorrow. After all, representative democracy only works if we have an informed and engaged citizenry.”

After lunch, students took part in the Institute’s nationally-recognized Senate Immersion Module program during which they found common ground on the Agricultural Act of 2014, more well-known as the Farm Bill. During their visit, the students, acting as senators for a day, passed the legislation by a vote of 67-15.

“I had a great time here because it is important for my students to understand the power that the Senate and the House hold in our government,” said Katie Saint Raymond, a Spaulding High School teacher who brought her AP U.S. Government, AP U.S. History, and civics classes as well as members of the Junior ROTC group. “The president is the face of the government and so the kids see that and know who that person is, but to understand how legislation is made and passed is complex. At the Institute, they are able to engage in a hands-on way that will stick with them.”

“The Institute is delighted to partner with Senator Sanders’s office once again to host these comprehensive educational opportunities for students from the Green Mountain state,” said Kennedy Institute president Mary K. Grant, Ph.D. “As they walk through our doors and discover civic education in a whole new way, we hope that they will make their voices heard and become civically engaged back in their own communities.”

The Edward M. Kennedy Institute for the United States Senate is a nonprofit organization in Boston envisioned by the late Senator Ted Kennedy; it is dedicated to educating the public about the important role of the Senate in government, encouraging civic participation, and invigorating civil discourse. Through a range of exhibits, interactive educational offerings, and programs, the Institute engages students and visitors in a conversation about the essential role each person plays in our democracy and in our society. Learn more via emkinstitute.org.