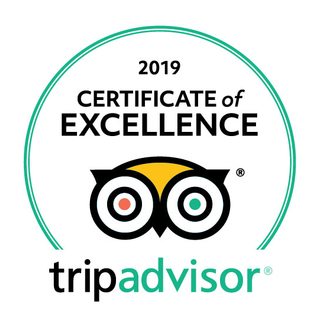 BOSTON – Today, the Edward M. Kennedy Institute for the United States Senate announced a new award in its collection: the 2019 TripAdvisor Certificate of Excellence. This accolade, which honors hospitality excellence, is given only to establishments that consistently achieve outstanding traveler reviews on the popular site, TripAdvisor, and is extended to qualifying businesses worldwide. The Kennedy Institute received this distinction in 2017 and 2018 as well.

TripAdvisor’s Certificate of Excellence accounts for the quality, quantity, and recency of reviews submitted by travelers on TripAdvisor over a 12-month period. To qualify, an organization must maintain an overall TripAdvisor bubble rating of at least four out of five, have a minimum number of reviews, and must have been listed on TripAdvisor for at least 12 months. Reviews about the Kennedy Institute on TripAdvisor may be viewed here.

“We are thrilled to once again receive recognition from TripAdvisor,” said Mary K. Grant, Ph.D., president of the Edward M. Kennedy Institute. “We are grateful to all those who took the time to provide their positive feedback. It is inspiring to see how our interactive programs and special exhibits resonate with visitors.”

The Institute is proud to be the recipient of numerous awards since its opening in 2015. This recognition includes the 2015 Spark Award, Gold Winner in Experience; 2016 Core77 Design Award; 2016 Interaction Award – Best in Category: Connecting; 2016 British Guild of Travel Writers Merit Award; 2017 Thea Award for Outstanding Achievement; and the inaugural Leonore Annenberg Institute for Civics Award in 2019.

About TripAdvisor
TripAdvisor® is the world’s largest travel site, enabling travelers to plan and book the perfect trip. TripAdvisor offers advice from millions of travelers and a wide variety of travel choices and planning features with seamless links to booking tools that check hundreds of websites to find the best hotel prices. TripAdvisor branded sites make up the largest travel community in the world, reaching 340 million unique monthly visitors, and 350 million reviews and opinions covering 6.5 million accommodations, restaurants, and attractions. The sites operate in 48 markets worldwide.