Students took part in several programs, including remarks from a state legislator, a journalism panel, and an interactive lawmaking simulation 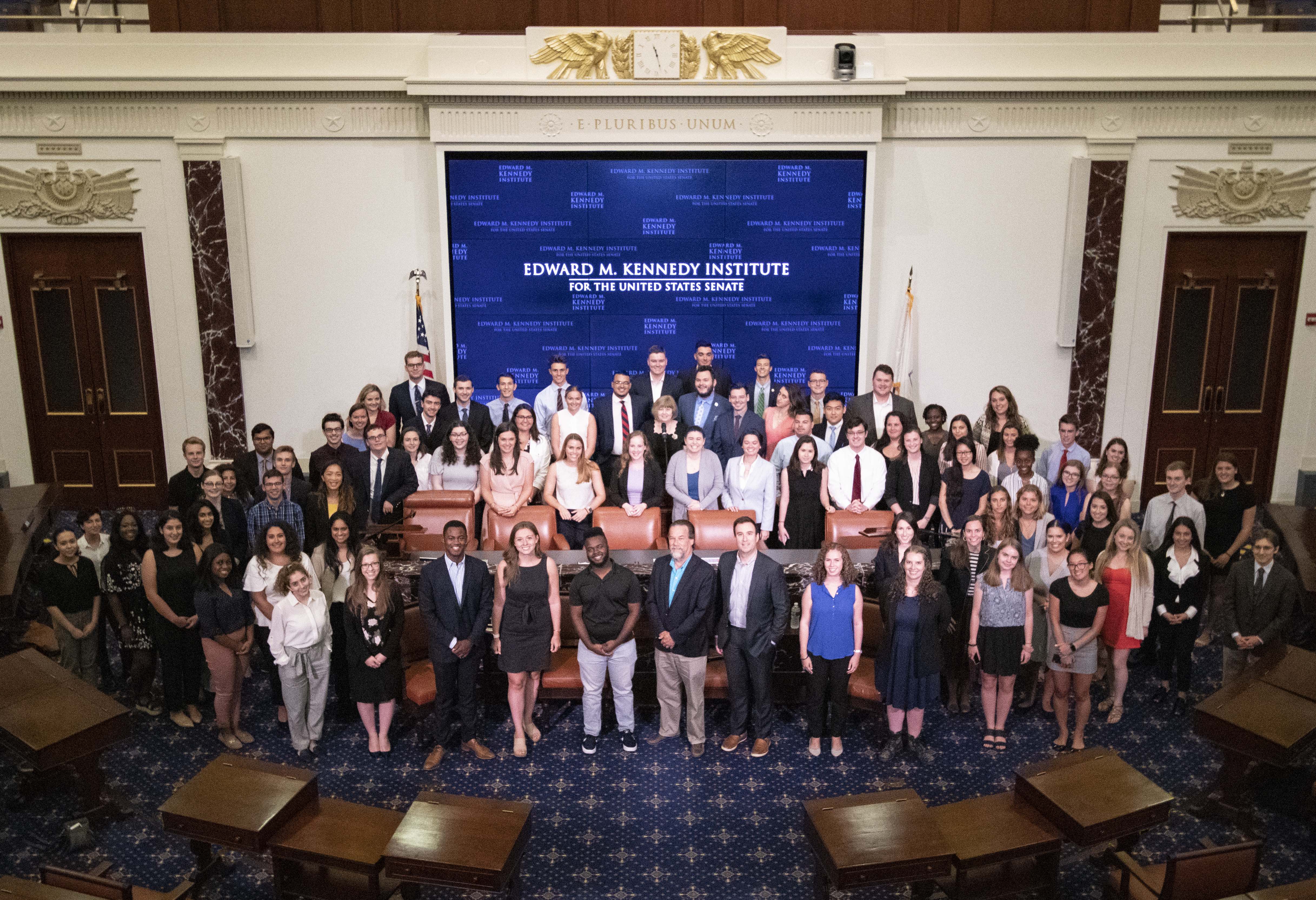 BOSTON – Yesterday, the Edward M. Kennedy Institute for the United States Senate hosted nearly 100 legislative interns representing cities and towns from across the Commonwealth of Massachusetts for a full day of activities that concluded with a hands-on simulation on the workings of the United States Senate. Using handheld tablets and with the facilitation of Institute education staff, students participated in the Institute’s Senate Immersion Module program, becoming senators for a day while working together to build and pass the Border Security, Economic Opportunity, and Immigration Modernization Act of 2013.

In the morning, participants heard from State Senator Patrick O’Connor (R-Weymouth), who shared his own path to and experience in public service, and emphasized the importance of bipartisanship and civic engagement.

“We have an inherent responsibility to participate in our democracy at the local, state, and federal level. Civic engagement leads to stronger communities and preserves the health of our democracy and its institutions.” said Senator Patrick O’Connor. “It is always great to see the large number of interns working at the State House – they’re looking to learn and become the leaders of their communities in the near future.”

Attendees then heard from journalists Stephanie Murray of Politico, WBUR’s Jerome Campbell and Steve Brown, and Matt Murphy from the State House News Service about their analysis on Beacon Hill and beyond. A question and answer session followed.

The Commonwealth’s Senate Office of Education & Civic Engagement organizes the event annually in partnership with the Kennedy Institute and includes students in high school and college who are interning for state senators and state representatives.

“It is a terrific opportunity for the interns to have a first-rate facility like the Edward M. Kennedy Institute for the United States Senate so close at hand,” said Anne Ziaja, executive director for the Senate Office of Education & Civic Engagement. “The venue itself is a great way for them to grasp what it is like to legislate – in an exciting atmosphere, too.”

Senate simulations at the Kennedy Institute offer participants a comprehensive and interactive opportunity to engage in the legislative process. Participants step into the role of a U.S. senator in the Institute’s full-scale replica Senate Chamber. Through hearings, committee mark-ups, and floor debates, senators for a day must work with their colleagues to negotiate and debate on behalf of their constituents. The process that culminates in a final vote on legislation ranging from the Compromise of 1850 to the PATRIOT Act. The particular bill that the State House interns addressed during their visit was the Border Security, Economic Opportunity, and Immigration Modernization Act of 2013. If enacted, it would provide a pathway to citizenship for illegal immigrants as well as update the visa application process.

“It was a privilege to host this impressive group of State House interns and have them experience our full-scale replica of the United States Senate Chamber,” said Mary K. Grant, Ph.D., president of the Kennedy Institute. “Their enthusiasm for public service is inspiring. They are our next generation leaders and we look forward to seeing all that they will accomplish.”

After consideration of the bill at hand, the student-senators passed the immigration reform bill with a vote of 55-17.