The Senate Staff Office opens on July 17 with hands-on activities, videos, and artifacts for visitors to explore 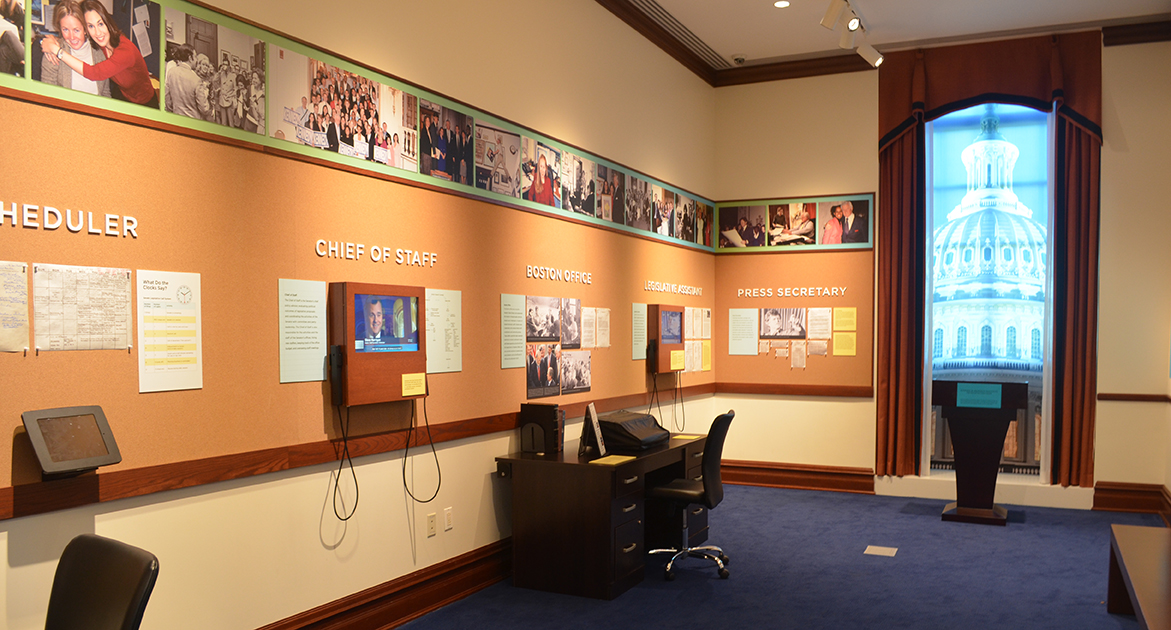 BOSTON – This week, the Edward M. Kennedy Institute for the United States Senate opens a new exhibit highlighting the important role that staff play in making a United States Senate office function. Through a mixture of hands-on activities, video features, and office artifacts, visitors have the opportunity to hear first-hand stories from Senator Edward M. Kennedy’s staff and take on the role of those tasked with completing daily Senate office responsibilities.

“More than 700 women and men worked for Senator Kennedy throughout his nearly 47-year career in the U.S. Senate,” said Barbara Souliotis, Institute board member and former Massachusetts state director for Senator Kennedy. “We see this exhibit as a way to inspire people interested in making a difference in their communities. Working for an elected official is one of the many paths to public service.”

The exhibit highlights key roles in the Washington, D.C. and the home state office, including the jobs of scheduler, chief of staff, legislative assistant, and press secretary. Through interactive activities and engaging multimedia components, a range of former Kennedy staffers bring to life the roles they held while working for Senator Kennedy.

“We’re at a time in our nation’s history where we need a new wave of leaders to engage in the essential work of democracy,” said Ranny Cooper, Institute board member and former chief of staff to Senator Kennedy. “Our elected representatives depend on a dedicated staff who advise on a range of critical public policy issues, help constituents navigate federal agencies and regulations, and support towns and cities in their pursuit of federal assistance. This exhibit gives visitors an intimate view of what goes into running a Senate office – both in Washington, D.C. and in a Senator’s home state.”

The Edward M. Kennedy Institute invites visitors to step into the shoes of a U.S. Senator for a day and gain a deeper understanding of how democracy functions. With a handheld tablet and skilled facilitators serving as guides, visitors explore digital exhibits and daily interactive programs that weave together the history and current debates of the U.S. Senate, Senator Kennedy’s legacy of service, and a call for visitors to engage in their own communities.

“Senator Kennedy was known for having some of the most responsive and dedicated staff working for him during his time in the Senate,” said Dr. Mary K. Grant, president of the Institute. “These talented staffers helped drive the meaningful legislation that Senator Kennedy championed while in office, and we are proud to be opening an exhibit that gives visitors insight into that work.”

The exhibit opens to the public on July 17, 2018. The Institute is open to visitors Tuesday through Sunday, 10 a.m. – 5 p.m. For more information, visit emkinstitute.org.

Majority of Voters Agree U.S. Senate Should Oversee Actions of the Executive Branch, According to Kennedy Institute Poll