Students and visitors to explore how their government works through legislation at the Edward M. Kennedy Institute 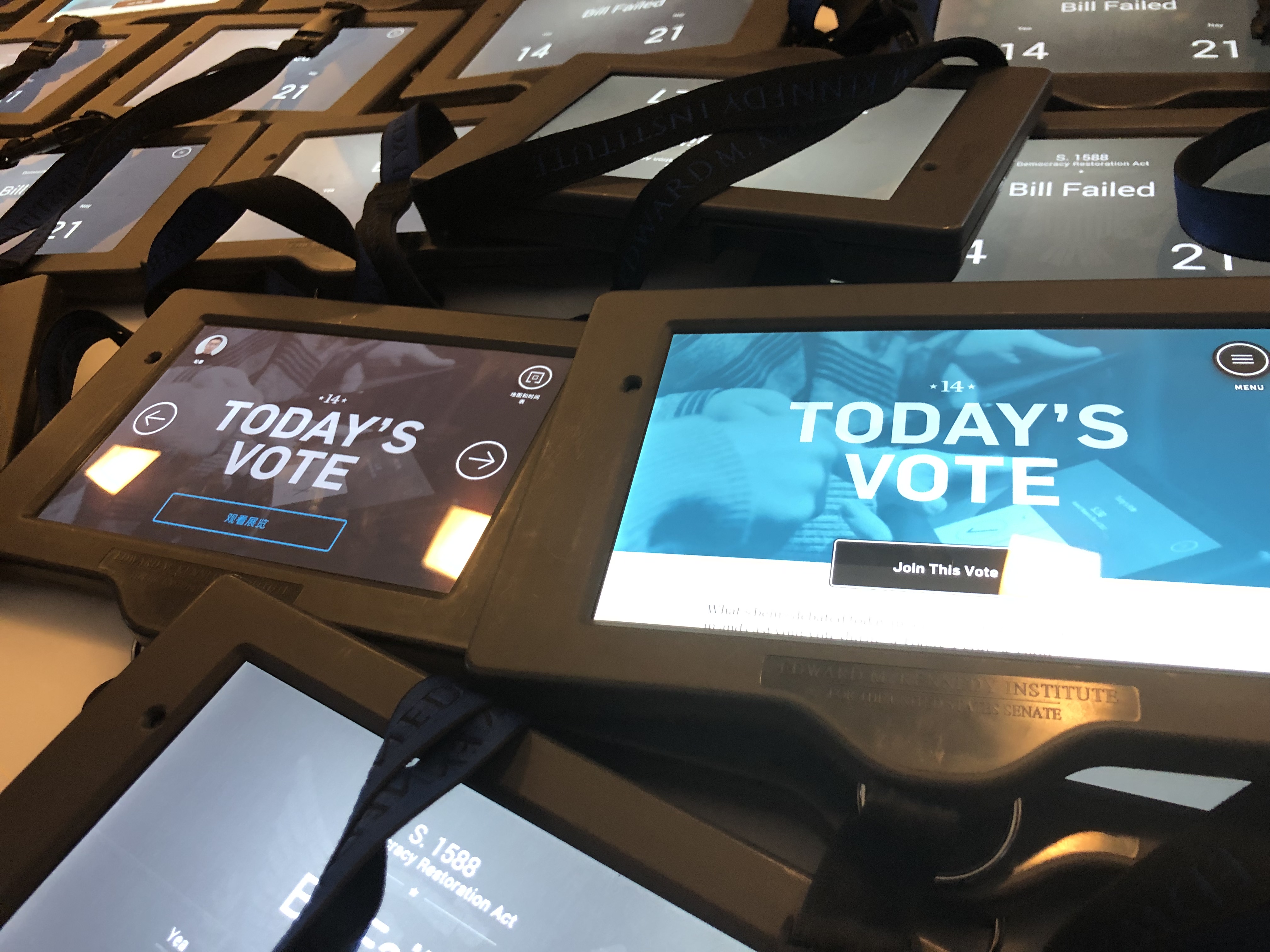 BOSTON – The Edward M. Kennedy Institute for the United States Senate is providing visitors with the opportunity to deliberate, discuss, and make their voices heard on a piece of legislation currently pending before the United States Senate. New this month, visitors who participate in the daytime Today’s Vote program at the Institute will have the chance to learn about and vote on S.J.Res.3, a joint resolution proposing an amendment to the Constitution of the United States that requires a balanced budget. This joint resolution is one of the first major pieces of legislation proposed in the 116th Congress which began in January 2019.

In the Institute’s interactive Today’s Vote program, visitors take on the role of a senator for a day to participate in a mock legislative session and live floor debate on a bill currently pending before the U.S. Senate. With digital tablets and skilled facilitators serving as guides, visitors learn about, debate, and vote on a joint resolution for a proposed amendment that would update the U.S. Constitution with a requirement that federal budgets submitted by a president not exceed total receipts for each fiscal year.

“With national gridlock over government funding so often in the news, our new Today’s Vote topic allows visitors to take part in an interactive opportunity to seek common ground and balance the budget,” said Mary K. Grant, Ph.D., president of the Edward M. Kennedy Institute. “We learned in the Institute’s most recent civic engagement poll that many Americans are unaware of basic facts about how government works. While matters of deficit and debt can sometimes feel complex, our program is designed to engage each person in conversation and voting in a collaborative, participatory way.”

Past Today’s Vote programs have taken on a number of important national issues such as gun legislation, pay equity, voter rights for the previously incarcerated, and the authorization for use of military force.

The Edward M. Kennedy Institute is open to visitors Tuesday through Sunday from 10 a.m. to 5 p.m. To learn more, visit emkinstitute.org.

The Edward M. Kennedy Institute for the United States Senate is a nonprofit organization in Boston envisioned by the late Senator Ted Kennedy; it is dedicated to educating the public about the important role of the Senate in government, encouraging civic participation, and invigorating civil discourse. Through exhibits, educational offerings, and topical programs, the Institute engages students and visitors in a conversation about the essential role each person plays in our democracy and in our society. Learn more via emkinstitute.org.