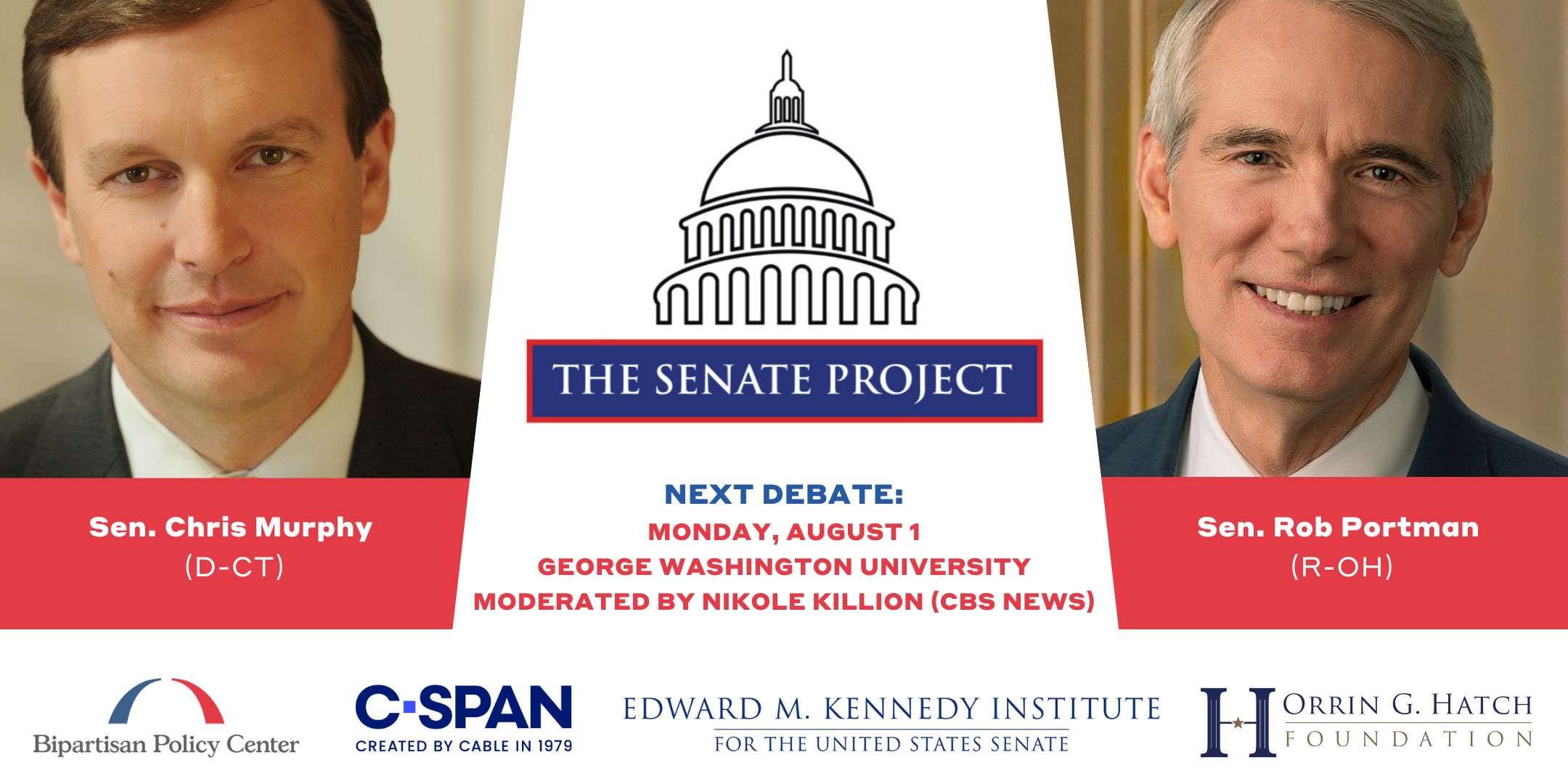 A diverse new coalition — the Bipartisan Policy Center, the Orrin G. Hatch Foundation, and the Edward M. Kennedy Institute for the United States Senate — is announcing the second in its series of Oxford-style debates between leading U.S. Senators.

“Over the last year, the Senate has made notable progress on several key issues, including bipartisan laws to strengthen our national infrastructure and combat gun violence, the kind of progress that can only be made through meaningful give and take and hard work to find common ground,” said Sen. Portman. “I have appreciated working with Senator Murphy on a number of important issues, and I want to thank the Bipartisan Policy Center, the Orrin G. Hatch Foundation, and the Edward M. Kennedy Institute for providing us a forum to engage in a thoughtful, policy-centered discussion on how to move our country forward and improve the lives of the American people.”

“The Senate purports to be the world’s greatest deliberative body, and yet too often, we respond to the most important issues facing Americans with inaction,” said Sen. Murphy. “This place can’t function unless Democrats and Republicans come out of their respective corners to hammer out our differences and get something done – something we proved with the Bipartisan Safer Communities Act. Senator Portman has been an important legislative partner in the Senate, and I look forward to our lively discussion next month.”

The goal of The Senate Project™ debate series is to reintroduce the culture of seeking common ground and consensus that has been the essence of the Senate since it was conceived in 1789. In a time of deep political polarization in America—and a 50-50 split between Democrats and Republicans in the Senate—the goal of The Senate Project is for the public to hear leading senators from competing ends of the political spectrum. The Oxford-style format of the 60-minute debate allows senators to engage in extended, thoughtful, wide-ranging debate while exploring areas of constructive disagreement and searching for bipartisan compromise.

“This debate series highlights the creativity and courage required to govern a divided nation,” said BPC President Jason Grumet. “Senators Murphy and Portman were critical leaders in this Congress’ signature achievements - investing in American infrastructure and confronting gun violence. We’re looking forward to hearing the spirited, substantive exchanges that will continue to build the foundation for future consensus.”

“The Senate Project’s first matchup between Senators Graham and Sanders engendered lively discussion on the most pressing policy topics of the day,” said Hatch Foundation Executive Director Matt Sandgren. “We now have a strong proof of concept for this new debate format, and we are looking to capitalize on this success with the next debate between Senators Portman and Murphy. They are policy leaders who are well respected by their colleagues on both sides of the aisle. I am confident that their discussion will draw out differences between the two parties but will also yield bipartisan areas of agreement on the issues that matter most to American families.” Plans are currently underway to finalize the date for a third Senate Project debate in Utah.

About the Bipartisan Policy Center
The Bipartisan Policy Center is a Washington, D.C.-based think tank that actively fosters bipartisanship by combining the best ideas from both parties to promote health, security, and opportunity for all Americans. Our policy solutions are the product of informed deliberations by former elected and appointed officials, business and labor leaders, and academics and advocates who represent both sides of the political spectrum. BPC prioritizes one thing above all else: getting things done. Learn more at https://bipartisanpolicy.org.

About the Orrin G. Hatch Foundation
Civility and solutions—these are the twin pillars of the Orrin G. Hatch Foundation. They are the ideals that underpinned the senator’s service and that guide the organization’s mission today. The foundation seeks to engender greater civic participation and understanding, to facilitate bipartisan dialogue, and to foster commonsense solutions to our nation’s most pressing problems by convening the greatest minds in American public life for high-level discussions on the public policy challenges of the day. Learn more at orrinhatchfoundation.org.

About C-SPAN
C-SPAN, the public affairs network providing Americans with unfiltered access to congressional proceedings, was created in 1979 as a public service by the cable television industry and is now funded through fees paid by cable and satellite companies that provide C-SPAN programming. C-SPAN connects with millions of Americans through its three commercial-free TV networks, C-SPAN Radio, C-SPAN Podcasts, the C-SPAN Now app, C-SPAN.org and various social media platforms. The network’s video-rich website contains over 270,000 hours of searchable and shareable content, archived since 1987 for educational and reporting purposes. Learn more about C-SPAN. Engage with C-SPAN on Twitter, Facebook, Instagram and YouTube, and stay connected through weekly and daily newsletters.