Edward M. Kennedy Institute Launches the Seat at the Table Project with Opening of New Exhibit 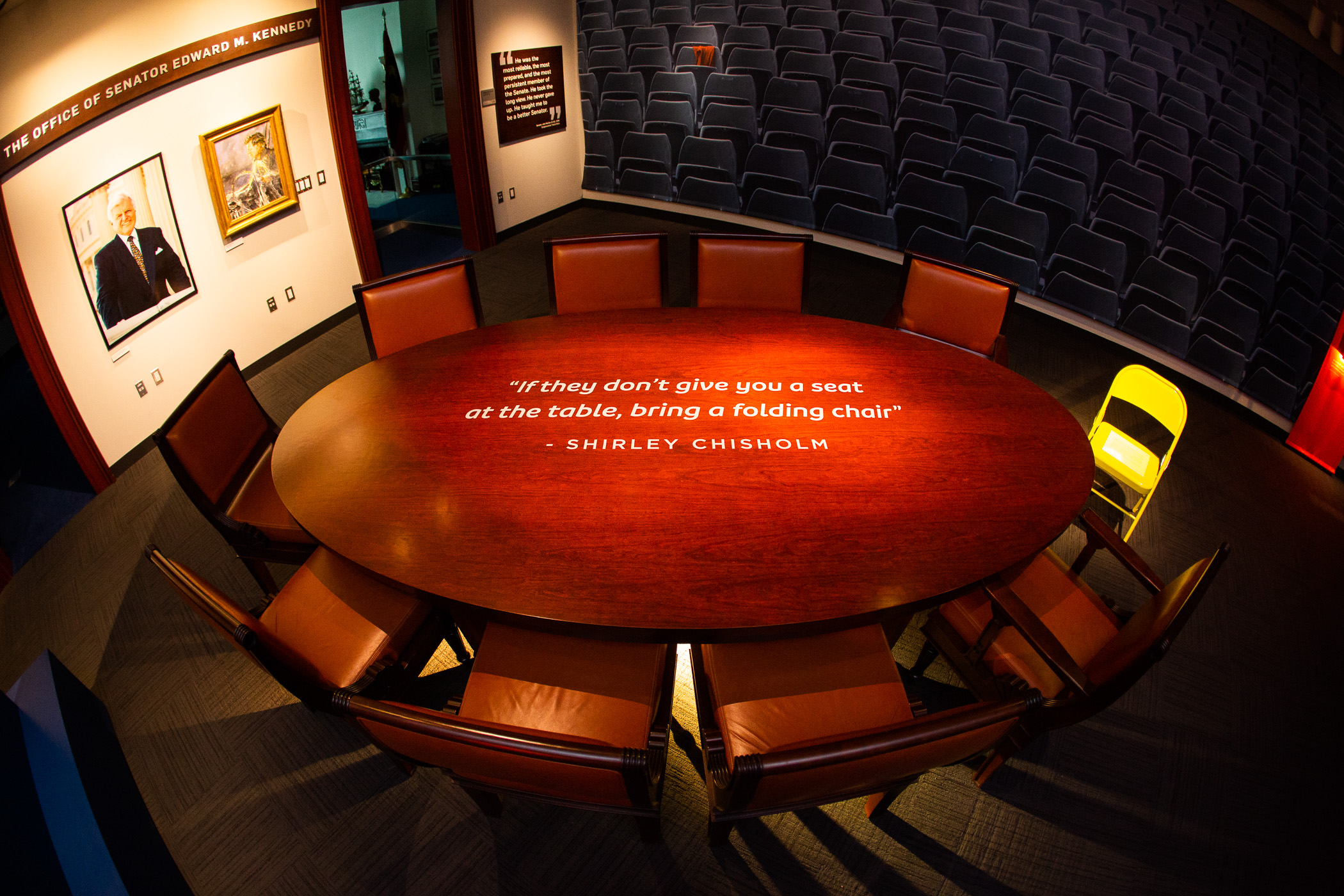 BOSTON – This week, the Edward M. Kennedy Institute for the United States Senate launched the Seat at the Table Project with the opening of an exhibit inspired by U.S. Congresswoman Shirley Chisholm’s words and work creating a more inclusive democracy. Through the Seat at the Table Project, the Institute will engage schools, community organizations, and visitors in a conversation about why diverse representation is vital for our democracy.

“We are launching the Seat at the Table Project at an important time in our democracy,” said Mary K. Grant, president of the Edward M. Kennedy Institute. “Through this exhibit and interactive workshops, we will engage people from throughout the Commonwealth to think about the value of bringing diverse perspectives to the table, and how they can step up to make their voices heard.”

The exhibit features a prominent table surrounded by shadowed heavy wooden chairs, with a spotlight on a folding chair representing Congresswoman Chisholm’s famous quote “if they don’t give you a seat at the table, bring a folding chair.” Shirley Chisholm became the first black woman elected to Congress in 1968, and became the first black candidate to run for presidential nomination of a majority party. Visitors can learn about key moments in Congresswoman Chisholm’s life, and explore her historic speeches.

“We designed this exhibit to highlight the challenge of breaking barriers and to encourage visitors to think about what representation means to them,” said Jan Crocker, senior exhibit and content developer. “The exhibit serves as an extension of Congresswoman Chisholm’s call to action to think about how we as a nation benefit when more people have a seat at the table.”

In the coming months, the Institute will work with youth-focused organizations and schools to conduct interactive art workshops where students will create and design folding chairs inspired by Congresswoman Chisholm. Select chairs created by community and school workshops will be displayed on rotation at the Institute throughout the duration of the project.

The Edward M. Kennedy Institute for the United States Senate is a nonprofit organization in Boston envisioned by the late Senator Ted Kennedy; it is dedicated to educating the public about the important role of the Senate in government, encouraging civic participation, and invigorating civil discourse. Through digital exhibits, interactive educational offerings, and topical programs, the Institute engages students and visitors in a conversation about the essential role each person plays in our democracy and in our society. Learn more via emkinstitute.org.