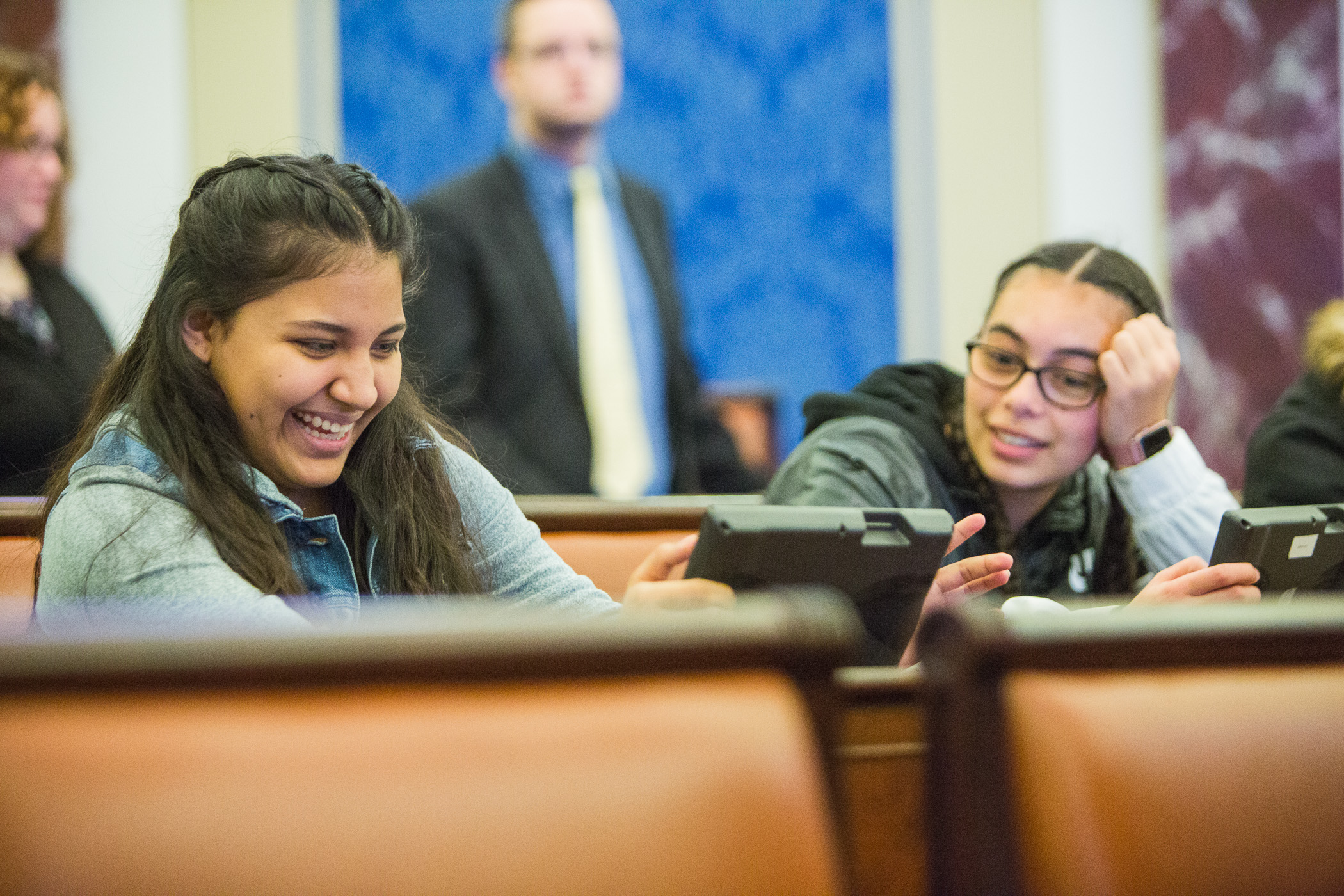 BOSTON – The Edward M. Kennedy Institute for the United States Senate hosted nearly 80 sophomores from New Mission High School in Hyde Park on Friday for a 2 and ½ hour hands-on, educational program on the workings of the Senate. Using interactive tablets provided by the Institute, students took on the role of U.S. senators and worked together to consider passing the Border Security, Economic Opportunity, and Immigration Modernization Act of 2013.

The Senate Immersion Module program (SIM) offers schools a comprehensive and interactive opportunity for students to engage in the legislative process. Students step into the role of a U.S. Senator in the Institute’s full-scale replica Senate Chamber to build and pass a piece of legislation on issues ranging from Reconstruction to Immigration Reform. Through conducting hearings, committee mark-ups, and floor debates, the student senators must work with their colleagues to negotiate and debate on behalf of their constituents in a process that culminates in a final vote on the legislation. Last year alone, the Institute welcomed more than 20,000 students from across the Commonwealth, the nation, and even the world to take part in the SIM program. The particular bill students addressed during their visit was the Border Security, Economic Opportunity, and Immigration Modernization Act of 2013. It would provide a pathway to citizenship for illegal immigrants as well as update the visa application process.

“The kids have a blast doing it,” said Brinda Tahiliani, New Mission High School’s history department chair. “They talk about it in the curriculum when we get back. We’ll do it as many years as we can. In the years past, kids have actually used this field trip in their final projects and the research that they’ve done to really talk about whichever issue we’ve done – last year, we did Reconstruction – that they actually do that as their final research that they choose because they’ve experienced it here they get it on a different level that can’t be done in the classroom.”

Boston City Councilor Tim McCarthy joined the NMHS students for their visit, and spoke with them about the value and importance of community involvement.

“I go to community meetings just about every night and there are community meetings all over your neighborhoods,” Councilor McCarthy said. “What I suggest you do is not be just a viewer, be a doer. So when you’re in your community, get involved – whether it’s with a nonprofit, like the YCMAs, the Boys and Girls Clubs or your libraries.”

The SIM program is offered at no cost to Massachusetts student groups, and corresponds with Massachusetts Common Core curriculum. Specifically, the SIM includes pre- and post-lesson materials that meet Literacy Standards.

“The Institute’s educational programs engage students in a conversation about how our government works, and beyond that, why civic engagement is a responsibility none of us can afford to shirk,” said Mary K. Grant, president of the Institute. “The Senate Immersion Module program offers a new, interactive approach to civic learning that gives the next generation of leaders a deeper understanding of our legislative process, and the role they can play in making a difference in their own communities. I was inspired by the thoughtful and respectful conversations today’s students were having around immigration reform.” Upon completing the program, the Boston student-senators voted down the immigration reform bill with a 31-36 vote.