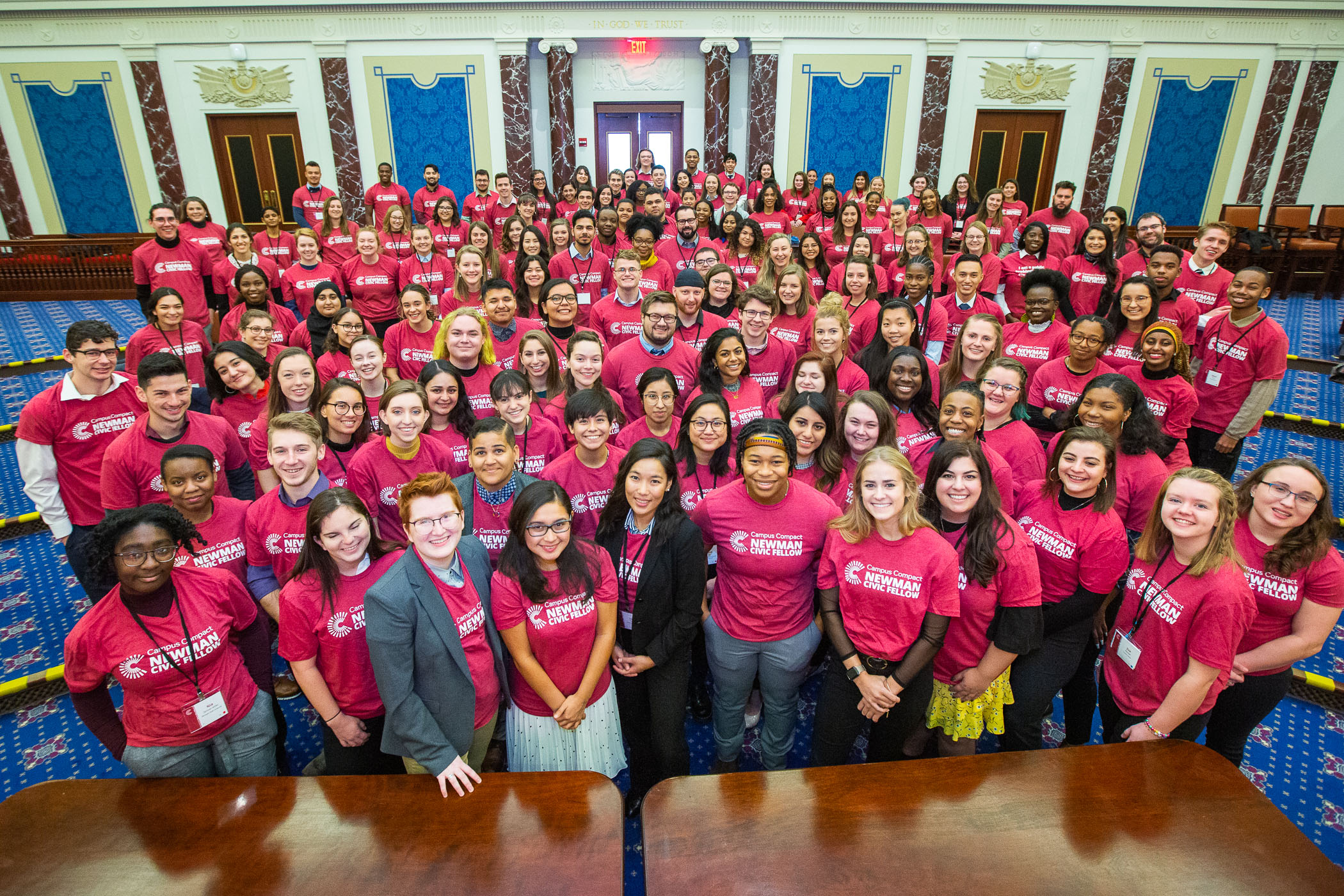 BOSTON – On November 15 and 16, the Edward M. Kennedy Institute for the United States Senate welcomed more than 200 participants from across the country for the Newman Civic Fellows Annual Convening hosted in partnership with Campus Compact. While in attendance, they took part in productive group conversations on policy and community-based change, heard from civic leaders, and made their voices heard through programs in the Institute’s full-scale replica Senate chamber.

Students nationwide were nominated by their college president or chancellor for community-oriented efforts as part of their selection for Campus Compact’s Newman Civic Fellowship.

“The Edward M. Kennedy Institute takes great pride in hosting the Newman Civic Fellows through our partnership with Campus Compact,” said Institute chief operating officer Gina Perille. “These rising leaders are already bringing participatory democracy to life through their engagement with the issues of the day. We hope that their activism, community engagement, political and public service passions only grow as a result of their time at the Institute.”

Envisioned by the late Senator Edward M. Kennedy, the Institute is a nonprofit, nonpartisan, civic education organization that offers a range of exhibits, interactive educational offerings, and topical programs that engage students and visitors in a conversation about the essential role each person plays in our democracy and in our society.

The Newman Civic Fellows visited Columbia Point for a weekend of programs, workshops, and networking, convening to discuss how to address societal challenges and to experience some of the Kennedy Institute’s legislative simulations. Among the hands-on legislative simulation experiences that the Newman Fellows took part in at the Institute was consideration and passage of the Green New Deal and deliberation on the merits of the PATRIOT Act.

Also while at the Kennedy Institute, the Newman Civic Fellows heard inspiring remarks from Boston City Council member Lydia Edwards who discussed her experience as an organizer and her path to elected office in the City of Boston.

“It was a pleasure to join the Kennedy Institute, Campus Compact, and all of the student leaders who are making a difference in their communities nationwide,” said Councilor Edwards. “The Newman Civic Fellows are an invigorating and positive example of how the next generation uses collaboration, community organizing, and creative public problem-solving to tackle significant issues facing cities, states, and our nation.”

Now in its fourth year of being held at the Institute, the convening gathered select community leaders at higher education institutions from all over the United States. Some of those who attended made the trip from as far away as Arizona and California to Oklahoma and Tennessee. The Newman Fellows also represent different areas of policy focus. In previous assemblages, some attendees were chosen for their work on affordable housing, climate change, community service, immigration reform, and other academic areas.

“The cultivation of community-committed leaders has never been more crucial,” said Campus Compact president Andrew Seligsohn. “Our Newman Civic Fellows are outstanding leaders at their institutions who are already bringing people together to create positive change. We’re proud to work in partnership with the Kennedy Institute to amplify the great work these students are doing, enable them to learn from each other, and prepare them to meet the challenges facing our democracy.”

The weekend convening was orchestrated by Campus Compact, a national association composed of more than 1,000 colleges and universities with a commitment to strengthening democracy through civic- and community-oriented values. Based in Boston, Massachusetts, the coalition serves as the single organization within the higher education sector aiming to help schools improve community life and educate students for civic and social responsibility.