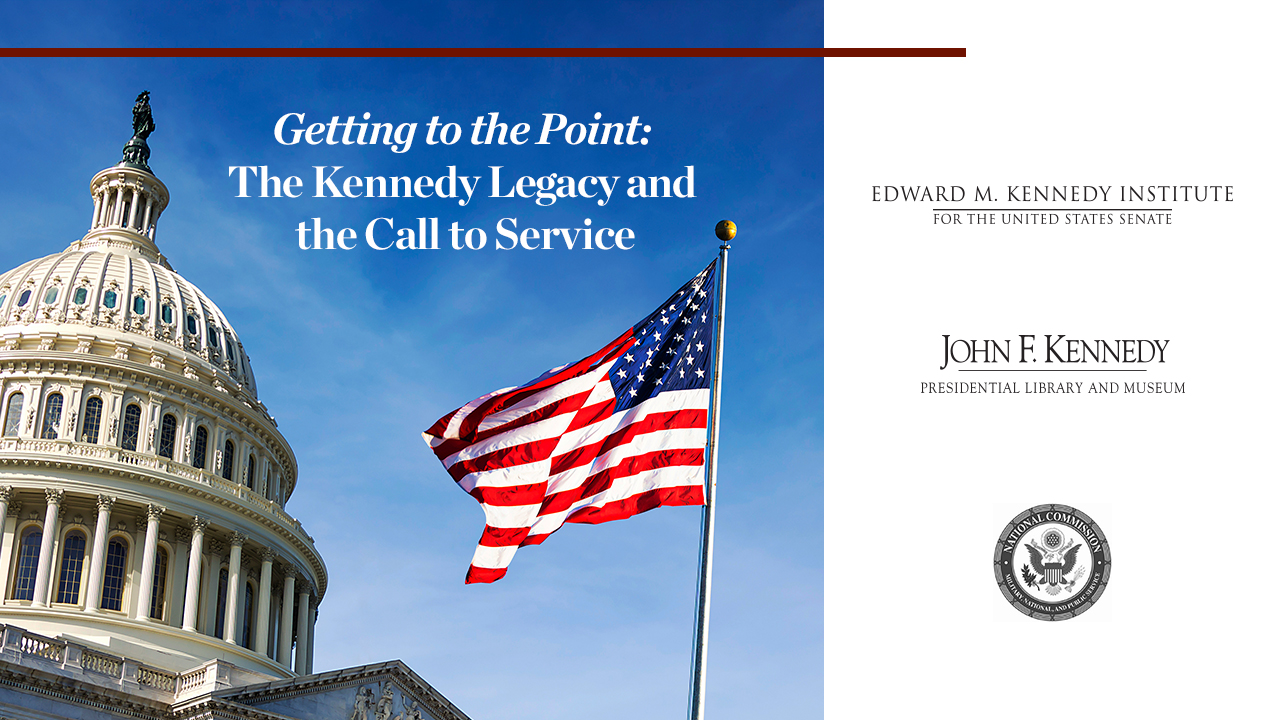 BOSTON – On Thursday, June 4, the Edward M. Kennedy Institute for the United States Senate, John F. Kennedy Presidential Library and Museum, and National Commission on Military, National, and Public Service will hold an online discussion with several key civic leaders and public servants about the crucial role that everyone can play in the common effort to work toward a more just society and strengthened democracy through public service, organized peaceful protest, volunteerism, and community activism.

In late March, the National Commission on Military, National, and Public Service released its report, Inspired to Serve, with 164 recommendations and a long-term goal to create a renewed culture of service, where every American is eager and inspired to serve. Nearly 60 years ago, President Kennedy inspired generations of Americans to “ask not what your country can do for you — ask what you can do for your country.” Now, as the harmful impacts of the novel coronavirus continue to unfold, many are asking how they can stay engaged in civic life and play a role in helping build community resilience. In partnership with the John F. Kennedy Presidential Library and Museum and the National Commission on Military, National, and Public Service, the Kennedy Institute will host a discussion on how building a culture of service can strengthen our communities and our democracy.

While the Institute’s facility remains closed for now, the commitment to civic engagement and civic education is as strong and vibrant as ever. This program marks the Institute’s third offering held entirely online and it will be available for anyone interested to engage with it both as a live event in addition to a recorded resource afterward. Any member of the general public who is interested in attending can register here.

WHAT:
Getting to the Point: The Kennedy Legacy and the Call to Service

About the John F. Kennedy Presidential Library and Museum
The John F. Kennedy Presidential Library and Museum is one of 14 presidential libraries administered by the National Archives and Records Administration and supported, in part, by the Kennedy Library Foundation, a nonprofit organization. The JFK Library and Museum is open daily from 9:00 a.m. to 5:00 p.m., with the exceptions of Thanksgiving Day, Christmas Day, and New Year’s Day. The Library is located in the Dorchester section of Boston, off Morrissey Boulevard, next to the campus of the University of Massachusetts/Boston. Parking is free. There is free shuttle-service from the JFK/UMass T Stop on the Red Line. The Museum is wheelchair accessible and all videos shown throughout the Museum are closed-captioned. For more information, call (866) JFK-1960 or visit www.jfklibrary.org.

About the National Commission on Military, National, and Public Service
The National Commission on Military, National, and Public Service is a bipartisan, 11-member Commission created by Congress to develop recommendations to inspire more Americans—specifically young people—to participate in military, national, and public service and to review the military selective service process. The Commission was established on September 19, 2017 and launched in January 2018. We released an Interim Report on January 23, 2019. Addressed to the American public, Congress, and the President, the Interim Report summarizes what we learned in our first year. The Commission published their Final Report, Inspired to Serve, complete with policy recommendations and legislative proposals, on March 25, 2020. The Commission’s work will conclude by September 2020. The Commission is comprised of eleven commissioners who bring together diverse experiences from service in the military, public office, Capitol Hill, and not-for-profit organizations. Further details are available at inspire2serve.gov.

Statement from Victoria Reggie Kennedy on Recent Events Across the Nation