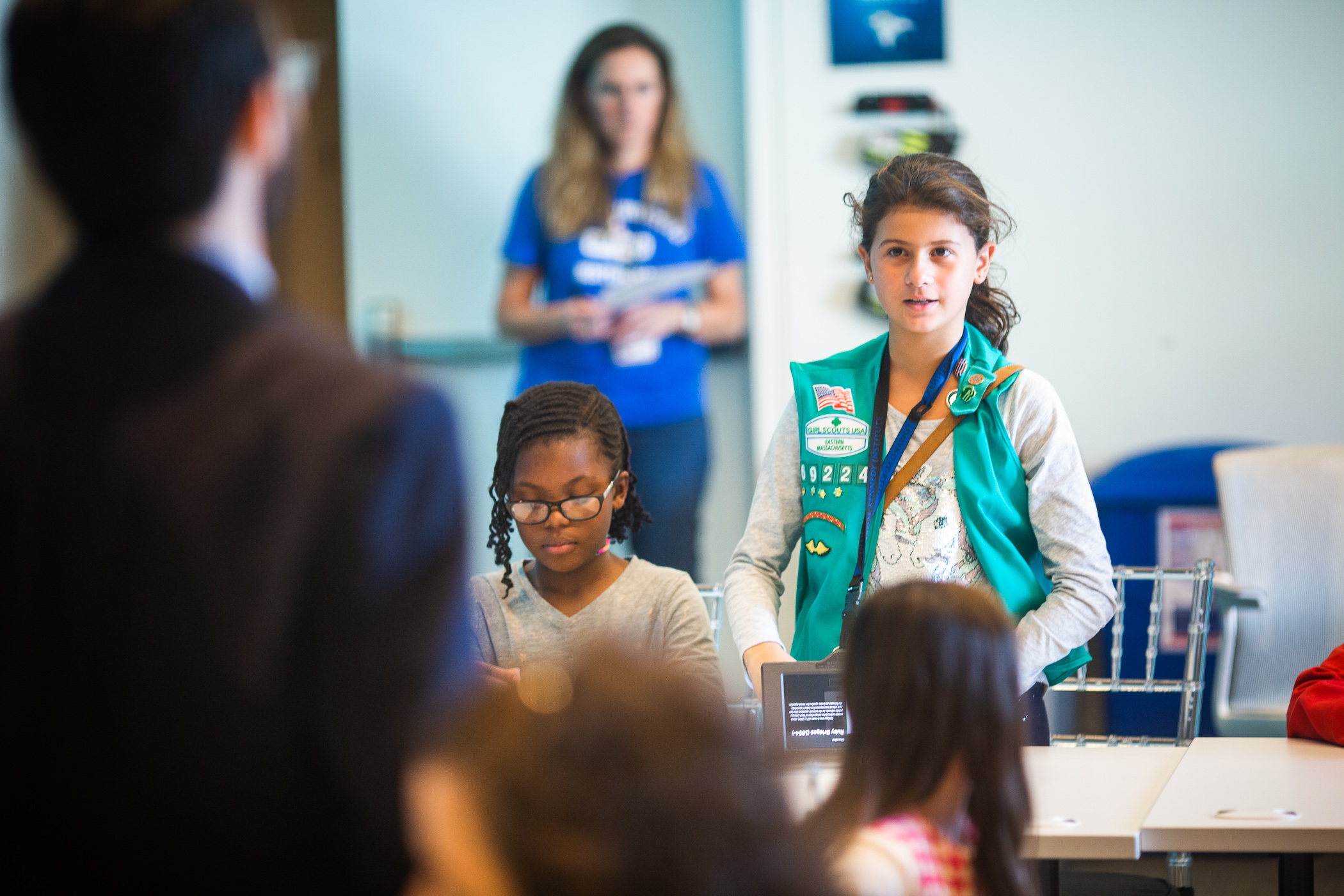 BOSTON - This year, the Edward M. Kennedy Institute for the United States Senate and the Girl Scouts of Eastern Massachusetts (GSEMA) are partnering to bring programs in civic education to Girl Scouts throughout the region. Through the partnership, the Institute engages Girl Scout members to offer a unique range of badge-earning programs that teach and promote the skills of understanding how our government works, learning how to take a position on an issue, embracing diverse communities and ideas, and finding common ground with those who think differently than you.

“We are proud to partner with the Girl Scouts of Eastern Massachusetts to help encourage girls to find their voices and see the importance of participating in their communities,” said Mary K. Grant, president of the Edward M. Kennedy Institute. “We are enthused about the unprecedented number of women who ran for elected office in the 2018 election cycle, and hope that through our programs with the Girl Scouts we can inspire more young girls to see themselves as capable of creating real and meaningful change.”

In the fall, the Institute welcomed a group of Cadettes in middle school to earn their Finding Common Ground badge by participating in the Reach Across the Aisle Program. Girl Scouts stepped into the shoes of a U.S. senator for a day in the Institute’s full-scale replica Senate Chamber to consider a piece of legislation on voting rights. Girl Scouts of all ages also participated in the Institute’s election-themed programs at the 2018 Kid Convention. GSEMA Girl Scout troops have also taken part in a number of other activities including the Seat at the Table Project, a workshop in which Girl Scouts discuss what representation and leadership means to them, inspired by Congresswoman Shirley Chisholm’s life work and her words “If they don’t give you a seat at the table, bring a folding chair.” Girl Scouts created chairs that represent them at the table.

Throughout 2019, the Institute will offer a number of new badge-earning and civic education programs for Girl Scouts of all ages:

• On Saturday, January 12, the Institute will host a Senator-for-a-Day program for Girl Scout Juniors (ages 8-11 years old) to earn their Inside Government badge. Girl Scouts will learn about the fundamentals of American government, what it means to be a senator, and how laws are made. Girl Scouts participating in this program will take a position on an issue of national importance, write a speech to support their views, and deliver their speech in the Institute’s Senate Chamber.

• On Saturday, February 9, the Institute will host a World-Wide Welcome program for Girl Scout Daises and Brownies (ages 5-8 years old) to earn their Good Neighbor and Celebrating Community badges. Girl Scouts will read a story about the Statue of Liberty and American communities, and will create collages inspired by the famous “New Colossus” poem found on the Statue of Liberty.

• On Saturday, April 27, the Institute and the Boston Children’s Hospital will host a program for Girls Scouts of all ages (Daisy through Ambassador) on Advocating for Our Health. Participants will become senators for the day to learn about health advocacy and to discuss, debate, and vote on an important piece of health care legislation.

“We value our partnership with the Edward M. Kennedy Institute and appreciate this well-timed collaboration that will empower the next generation of female leaders,” said Jim Cronan, chief financial officer and interim chief executive officer at Girl Scouts of Eastern Massachusetts. “Their hands-on programs complement the Girl Scout Leadership Experience perfectly, and will provide a first-hand opportunity for Girl Scouts to see and experience how democracy functions best when more voices are included.”

Edward M. Kennedy Institute calls on artists to participate in growing exhibit about importance of diversity in democracy