Event made possible by a Government of Ireland grant which also supports promotion of the global impact of the Kennedy family’s public service, their connection to Ireland, and important events in Irish history 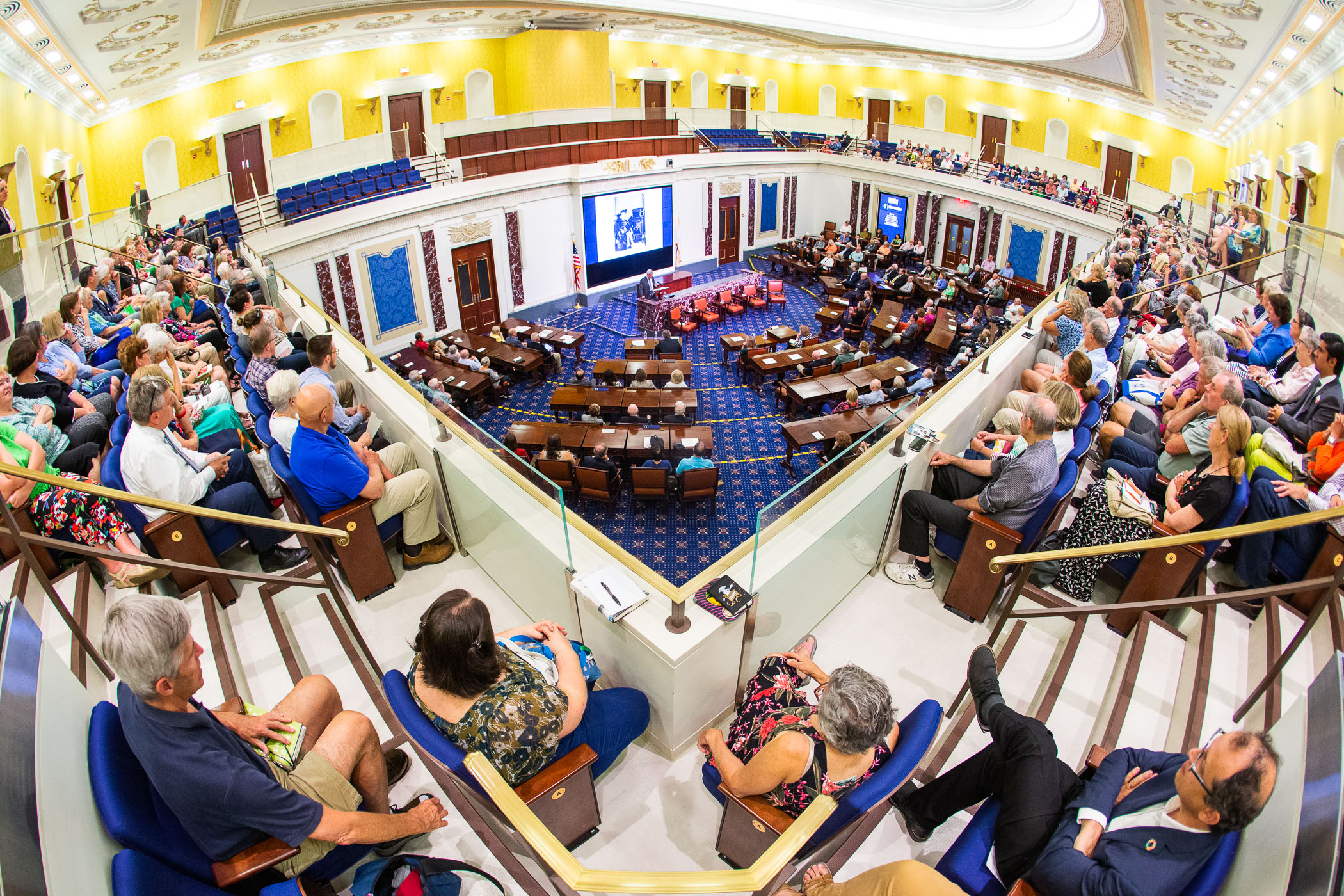 BOSTON – On Monday, the Edward M. Kennedy Institute for the United States Senate and the Irish Consulate of Boston hosted Irish experts to discuss the 100th anniversary of when Eamon de Valera, future Taoiseach and future President of Ireland, addressed a crowd of 50,000 people at Fenway Park to make his case for Irish independence, marking an inflection point in the relationship between the United States and Ireland. In recognition of this anniversary Irish leaders, historians, and expert commentators gathered at the Institute to reflect on the significance of de Valera’s visit to Boston in June 1919, and the evolution of relations between Ireland and the United States in the 20th century to the relationship and politics today. This public event was funded by a grant awarded by the Government of Ireland Emigrant Support Programme.

The program featured a keynote by noted de Valera biographer, RTE journalist David McCullagh, who shared the history of de Valera’s visit to Fenway Park in 1919 and reflected on his career as a rebel to a statesman. Following the keynote, a panel, moderated by Boston Globe columnist, Kevin Cullen, discussed the significance of de Valera’s visit and the evolution of relations between the United States and Ireland over the last century. The panel participants included Daniel Mulhall, Ireland’s Ambassador to the U.S., Damien Murray, Ph.D., Professor of History at Elms College and Catherine Shannon, Ph.D., Professor Emerita at Westfield State University.

“Monday’s conversation was the latest in a popular and rewarding series in partnership with the Irish Consulate of Boston through generous support from the Government of Ireland,” said Institute president Mary K. Grant, Ph.D. “With our intertwined histories, the Institute had the opportunity to host engaging programs that highlight Senator Kennedy’s deep connection to Ireland and the two nations’ strong and enduring relationship.”

The program on Monday highlighted future Irish president Eamon de Valera’s 1919 visit to the United States, his leadership in founding the independent nation, as well as how the American and Irish relationship evolved since that era. At a monumental time for both countries, de Valera’s address to a packed crowd in the landmark baseball stadium with onlookers flooding into the nearby streets exemplified the start of a transition from the efforts of a resolute movement into a sovereign country not long after. Convening top analysts on historical and modern issues led to a powerful discussion of the Irish leader, the impact of his visit to the U.S. 100 years ago, and his legacy today.

“The Irish Consulate of Boston cherishes its strong partnership with the Kennedy Institute and its commitment to actively engaging the communities it serves,” said Laoise Moore, the Consul General of Ireland to Boston. “Together, we are able to convene conversations that connect Ireland and the United States through historic and contemporary lenses.”

In 2018, the Institute was awarded a $30,000 grant from the Government of Ireland Emigrant Support Programme to support new programs, future exhibits, and research designed to teach Institute visitors about the global impact of the Kennedy family’s public service, their connection to Ireland, and important events in Irish history.

The grant has supported a number of joint programs between the Kennedy Institute and Irish Consulate for youth, college students, and adult audiences. Other efforts supported by the grant included a screening and discussion for middle and high school students held at the Institute in October 2018 about a documentary titled “Condemned to Remember,” which follows the experiences of a Holocaust survivor and Irish citizen reflecting on the parallels between recent European history and present-day migration stories. The Institute also featured Ambassador Daniel Mulhall, Ireland’s Ambassador to the United States, for a wide-ranging conversation on U.S. – Irish affairs in May 2019. The Institute also hosted a supplementary film screening of “The Peacemaker” with a continued focus on Ireland’s experience in peacemaking and conflict resolution. The funds will also support the archiving work of Senator Kennedy’s collections.

About the Edward M. Kennedy Institute
The Edward M. Kennedy Institute for the United States Senate is a nonprofit, nonpartisan civic education organization in Boston envisioned by the late Senator Edward M. Kennedy; it is dedicated to educating the public about the important role of the Senate in government, encouraging civic participation, and invigorating civil discourse. Through a range of exhibits, interactive educational offerings, and topical programs, the Institute engages students and visitors in a conversation about the critical role each person plays in our democracy and in our society. Learn more via emkinstitute.org.

As new funding formula sought in Massachusetts, Kennedy Institute to host June 24 conversation on the state of public education