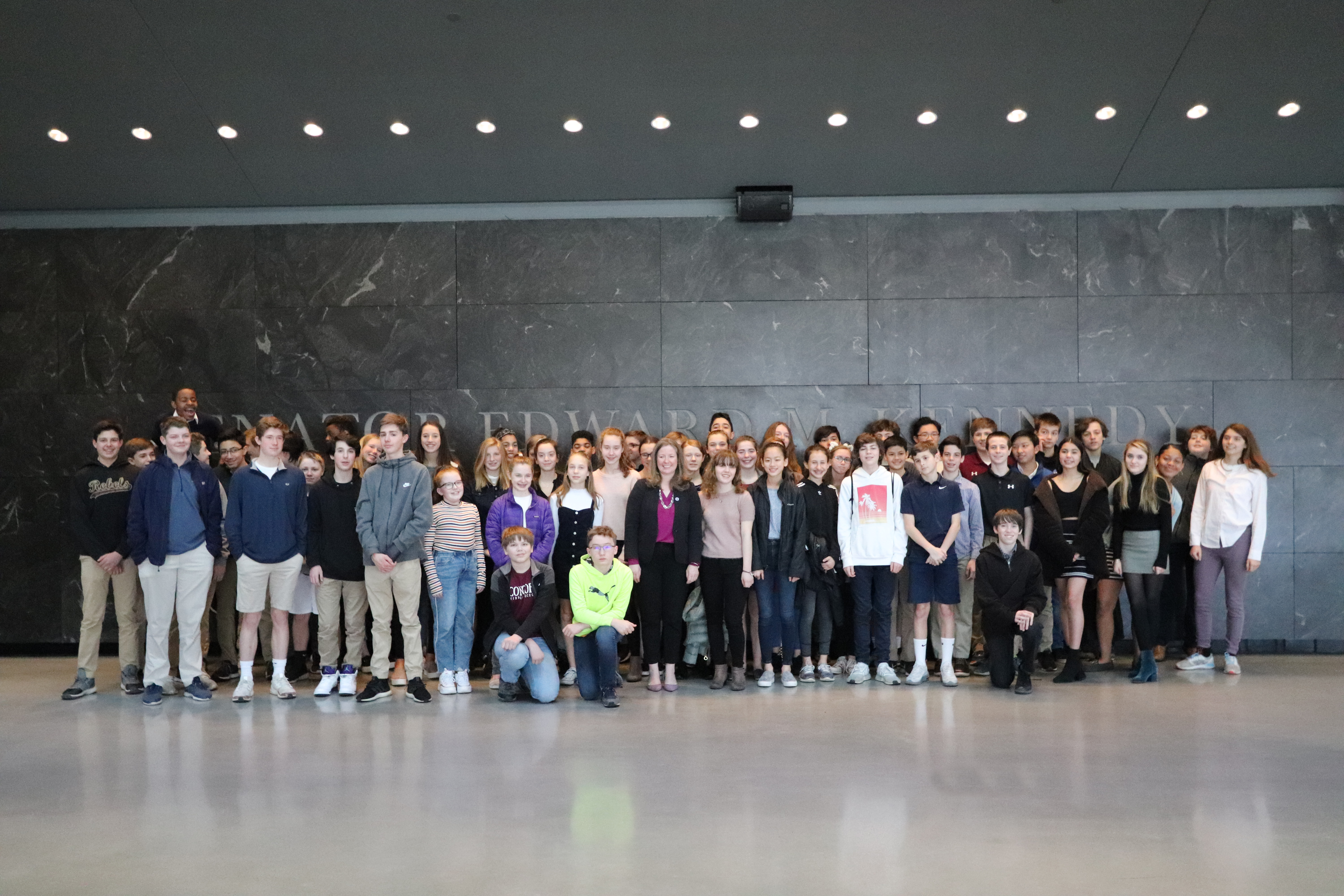 BOSTON – The Edward M. Kennedy Institute for the United States Senate hosted eighth graders from Concord Middle School on Thursday, April 11, for a hands-on, instructive program on the workings of the Senate. Students took on the role of U.S. senators and worked together to build and pass legislation to address comprehensive immigration reform in the country.

The Senate Immersion Module program offers schools a comprehensive and interactive opportunity for students to engage in the legislative process. Students step into the role of a U.S. Senator in the Institute’s full-scale replica Senate Chamber to build and pass a piece of current or historic legislation on issues ranging from Restoration to the PATRIOT Act. Through conducting hearings, committee mark-ups, and floor debates, the student-senators must work with their colleagues to negotiate and debate on behalf of their constituents in a process that culminates in a final vote on the legislation. Students worked together to build and pass the Border Security, Economic Opportunity, and Immigration Modernization Act of 2013.

“For my students coming to Kennedy Institute each year, it is about actively engaging with the curriculum and bringing it to life,” said Seeta Durvasula, Concord Middle School’s social studies department chair organizing the visit. “Students who normally may have trouble grasping some of the concepts about civic engagement are the ones that I find tend to participate the most in the simulation and they come away with a deeper understanding of the process.”

State Representative Tami Gouveia (D-14th Middlesex) joined the sixty one Concord student-senators for part of their visit and spoke with them about the importance of civic education and engagement.

“The role of education is to develop young people into citizens of the country and of the world. Engaging in civic opportunities, learning about civics early on, gives them the important practice that they need in order to be able to be those engaged citizens when they are old enough to vote,” said Representative Gouveia. “Coming to the Kennedy Institute and learning about how a bill becomes a law, and about how the Senate operates, is an important opportunity for them to be exposed to how our government works and then what their role is in making our government work for everybody.”

The Senate Immersion Module includes pre- and post-lesson materials that meet literacy standards. Massachusetts students are able to visit the Institute at no cost to their schools. Last year alone, the Institute welcomed more than 22,000 students from across the Commonwealth, the nation, and even the world to take part in the programs.

“The Institute’s unique selection of educational programs engage students in a conversation about how our government works and, further, why civic engagement is a responsibility none of us can take for granted,” said Institute president Mary K. Grant, Ph.D. “The Senate Immersion Module program offers an exciting, immersive approach to civic education that provides the next generation of leaders with a deeper understanding of our legislative process and the important role they can play while making a difference within their own communities. We were delighted to have the students, teachers, and Senator Pacheco with us.”

Upon completing the program, the Concord student-senators opposed the immigration bill with a vote of 21-38-2.