Edward M. Kennedy Institute calls on artists to participate in growing exhibit about importance of diversity in democracy

Inspired by Congresswoman Shirley Chisholm’s legacy, “A Seat at the Table” runs throughout 2019 on Columbia Point in Boston 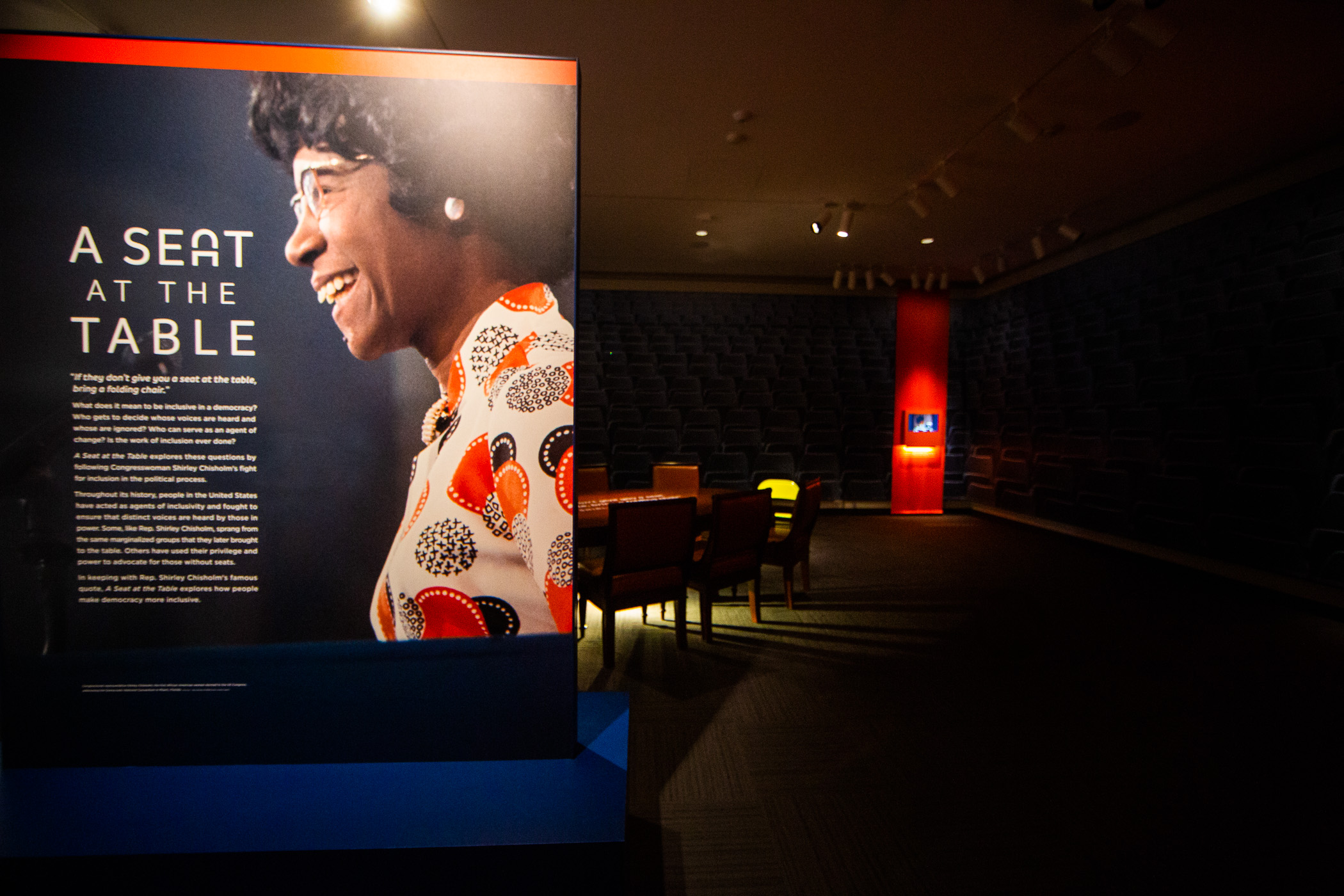 BOSTON – The Edward M. Kennedy Institute for the United States Senate issued a call to artists across the country to design a chair for inclusion in the Institute’s dynamic A Seat at the Table exhibit. The exhibit is inspired by Congresswoman Shirley Chisholm’s words and lifetime of work to promote a more inclusive democracy. A Seat at the Table is currently on display at the Institute in Boston and will run throughout 2019.

The exhibit features a prominent table surrounded by a wide selection of chairs and a spotlight on a folding chair representing Congresswoman Chisholm’s famous quote, “If they don’t give you a seat at the table, bring a folding chair.”

Shirley Chisholm was the first black woman elected to Congress in 1968 and the first black candidate to run for the presidential nomination of a majority party. Over the course of her 14 years in Congress, Chisholm was a force for change and a champion of legislation that would improve the quality of life for women, children, people of color, and the poor. In the A Seat at the Table exhibit, Institute visitors learn about key moments in Congresswoman Chisholm’s life and explore her historic speeches through various aspects of the immersive display.

Through a series of interactive workshops held at the Institute and across the Greater Boston area, the Institute engages schools and community organizations in conversations about why diverse representation is vital for democracy. The result of these workshops are unique chairs created by the participants as representations of voices, messages, and topics to be discussed at tables at the national, local, and personal level. Select chairs created by community and school groups are on rotating display at the Institute throughout 2019 as part of A Seat at the Table.

The new call to artists is an invitation for artists to interpret the journeys to the table of prominent legislators and activists, both historical and contemporary. Featured individuals have been chosen as examples of how people are the agents of inclusion in democracy.

“A Seat at The Table was created both as an artistic endeavor and as a conversation generator to spark conversation among our visitors about why diversity matters in democracy,” said Kennedy Institute president Mary K. Grant, Ph.D. “Now, we are calling on artists across the country to create distinct chairs to recognize admirable individuals and help share how each of them made a lasting impact on our country.”

A collection of twenty artist-designed chairs will highlight achievements by activists, legislators, and other Americans with contemporary or historic significance. Artists that would like to submit an entry may do so by filling out an application on the Institute’s website. A jury panel will select final participants. The deadline for responding to the Institute’s call to artists is February 1, 2019.

“The Kennedy Institute is honored to showcase Congresswoman Shirley Chisholm’s famous words and life story through this exhibit – one that makes you think about why diversity of representation is vital and what necessary contributions we each bring to the table when we pull up a chair,” said Jan Crocker, Senior Exhibit and Content Developer. “The exhibit serves as an extension of Chisholm’s call to action to think about how we as a nation benefit when more people have a seat at the table.”

The Edward M. Kennedy Institute for the United States Senate is a nonprofit organization in Boston envisioned by the late Senator Ted Kennedy; it is dedicated to educating the public about the important role of the Senate in government, encouraging civic participation, and invigorating civil discourse. Through a range of exhibits, interactive educational offerings, and programs, the Institute engages students and visitors in a conversation about the essential role each person plays in our democracy and in our society. Learn more via emkinstitute.org.