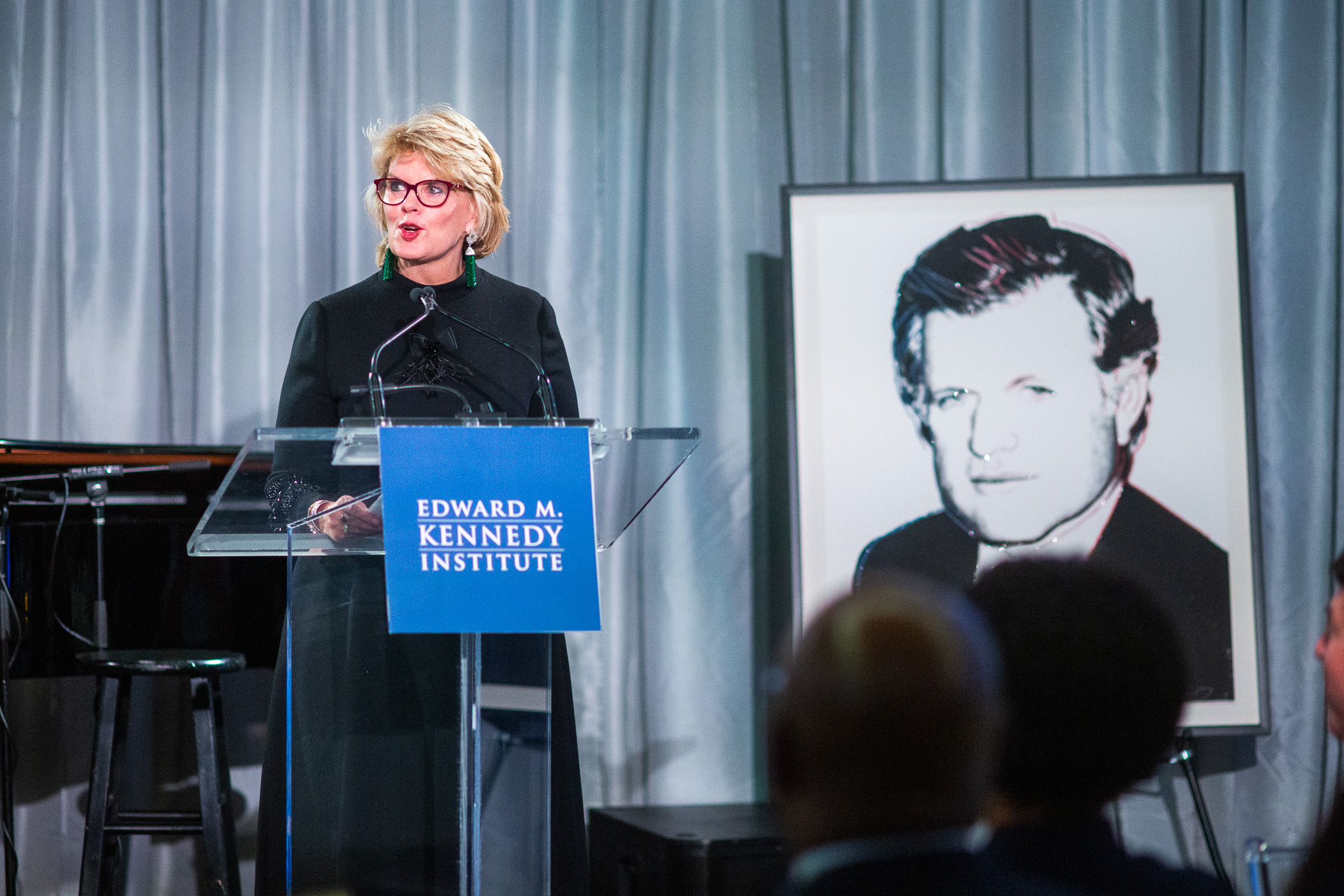 “The Edward M. Kennedy Institute Award for Inspired Leadership recognizes an individual who possess qualities that reflect the legacy of my late husband Senator Edward M. Kennedy: modeling exemplary leadership; inspiring others to action; and making a difference through service to community and country. These attributes perfectly describe Anne,” said Victoria Reggie Kennedy, Co-Founder and President of the Board of the Institute. “Throughout her remarkable career, Anne has used her incomparable skills to make lives better, to make the world better. And in the process, she has inspired countless others, especially young women, who want to follow in her footsteps.”

Anne M. Finucane is vice chairman at Bank of America and chairman of the board of Bank of America Merrill Lynch, Europe. As a member of the executive management team, Finucane is responsible for the strategic positioning of Bank of America and leads the company’s environmental, social and governance (ESG), capital deployment, and public policy efforts. Active in the community, Finucane serves on a variety of corporate and nonprofit boards of directors including Carnegie Hall, the National September 11 Memorial & Museum, The Ireland Funds, the World Bank Group’s Women Entrepreneurs Finance Initiative (We-Fi), CVS Health, Brigham and Women’s Hospital, Partners Healthcare, and Special Olympics. She served on the U.S. State Department’s Foreign Affairs Policy board and is a member of the Council on Foreign Relations. Finucane has received numerous professional and public service accolades. Most recently, she was inducted into the Advertising Hall of Fame. She has been named to Fortune’s Most Powerful Women and Forbes’ Most Powerful Women Lists, and American Banker magazine annually names her among the 25 Most Powerful Women in Banking. In March 2018, Finucane was honored with the Leadership Award by The Ireland Funds. In 2013, she received the New York Women in Communications Matrix Award and the International Women’s Media Foundation Leadership Award. “To receive this award is a tremendous honor. Throughout my career, my work has returned to and reinforced the importance of service,” said Anne M. Finucane. “Senator Kennedy and the Kennedy Institute hold special meaning to me and it is a privilege to be able to celebrate the organization’s integral mission to empower the next generation of leaders.”

The Edward M. Kennedy Institute opened to the public in 2015. Through a range of exhibits, interactive educational offerings, community events, and topical programs, the Kennedy Institute educates students and visitors of all ages about the role of the United States Senate in our government and engages and inspires visitors to be involved and active citizens.

“Serving together as co-chairs for the 2019 annual dinner was a sincere pleasure given the important work that takes place at the Kennedy Institute each day,” said dinner Co-Chairs Dr. Anne Kilbanski and Tom Werner, and honorary chair Jack Connors Jr., who was last year’s award recipient. “There is no one worthier of this recognition than Anne Finucane. She has been supportive of the Institute since the beginning. We have deep gratitude for her steadfast devotion to strengthening communities and supporting the next generation. Her efforts on behalf of numerous organizations are emblematic of the incredible person Anne Finucane is.”

“The Edward M. Kennedy Institute’s mission to engage the public and invigorate civil discourse is more essential than ever,” said Mary K. Grant, Ph.D., president of the Institute. “Through her focus on community and lifting up of important causes, Anne Finucane exemplifies that vision. It was visible throughout the evening how much energy and support there is for the crucial task to strengthen the citizen participation in our democracy. We are grateful to the hundreds of individuals who stepped up to make a difference and further the civic engagement efforts on display year-round at the Edward M. Kennedy Institute.”

Edward M. Kennedy Institute to Host Next Generation of Leaders at Kid Convention