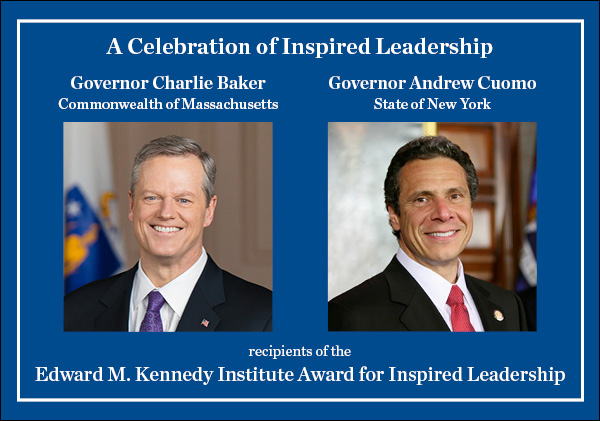 “Teddy used to say that you can tell a lot about a country –– or in this case, an Institute –– by looking at the people it honors. So when we designed the Award for Inspired Leadership, we decided to recognize people with the qualities that reflect Teddy’s legacy. People who model exemplary leadership. Who inspire others to action. Who make a difference through service to the community and the country. Boy, did we need those qualities this year,” said Victoria Reggie Kennedy, Co-Founder and President of the Board of the Kennedy Institute. “I congratulate our outstanding recipients of this year’s Award for Inspired Leadership, Massachusetts Governor Charlie Baker and New York Governor Andrew Cuomo, on this well-deserved honor.”

This is the first year that the Kennedy Institute has named two recipients for its Award for Inspired Leadership with Governor Baker and Governor Cuomo being recognized for this year’s award due to their nonpartisan leadership on public safety during the coronavirus pandemic in their respective states. During a moderated discussion with NBC News White House Correspondent Kristen Welker, the governors spoke of efforts to help their states recover from the pandemic, the importance of seeking common ground to help residents amidst a public health emergency, and Senator Edward M. Kennedy’s legacy of public service.

“I am deeply grateful to Vicki Kennedy and the folks at the Kennedy Institute as well for this award and for what it represents. I have always thought of Senator Kennedy as one of those people who was able to work both sides of the aisle and did it on almost every major piece of legislation he got passed,” said Governor Charlie Baker. “And, in this particular time, finding a way to collaborate and work with others that you may not agree with on everything is, in some respects, a science that I think is incredibly important and we probably need more of it. And, for me, that’s a huge part of what makes this so special.”

“I miss Senator Ted Kennedy. I miss his leadership. I miss his record of accomplishments. I miss his personal touch, the charisma, and the inspiration,” said Governor Andrew Cuomo. “He was inspirational as a government leader and God bless everyone at the Institute for keeping that alive. He was one of the greats and a role model for many of us. I know for me. So thank everyone who has participated to keep young people learning about that important lesson.”

The Institute’s annual event attracted guests from across the country and helped to support the Kennedy Institute’s educational programs, public forums, and digital exhibits that aim to bring the late Senator Kennedy’s vision of civic engagement to life. Since opening to the public in 2015, the Kennedy Institute has offered a range of exhibits, interactive educational offerings, community events, and topical programs designed to engage visitors of all ages in the role of the United States Senate in our government and everyone’s role in the democratic process.

About the Award for Inspired Leadership
The Edward M. Kennedy Institute Award for Inspired Leadership recognizes an individual who possesses qualities that reflect the legacy of Senator Edward M. Kennedy: modeling exemplary leadership, inspiring others to action, and making a difference through service to the community and country. Governor Baker and Governor Cuomo were recognized for this year’s award for their nonpartisan leadership on public safety during the coronavirus pandemic on behalf of their respective states.