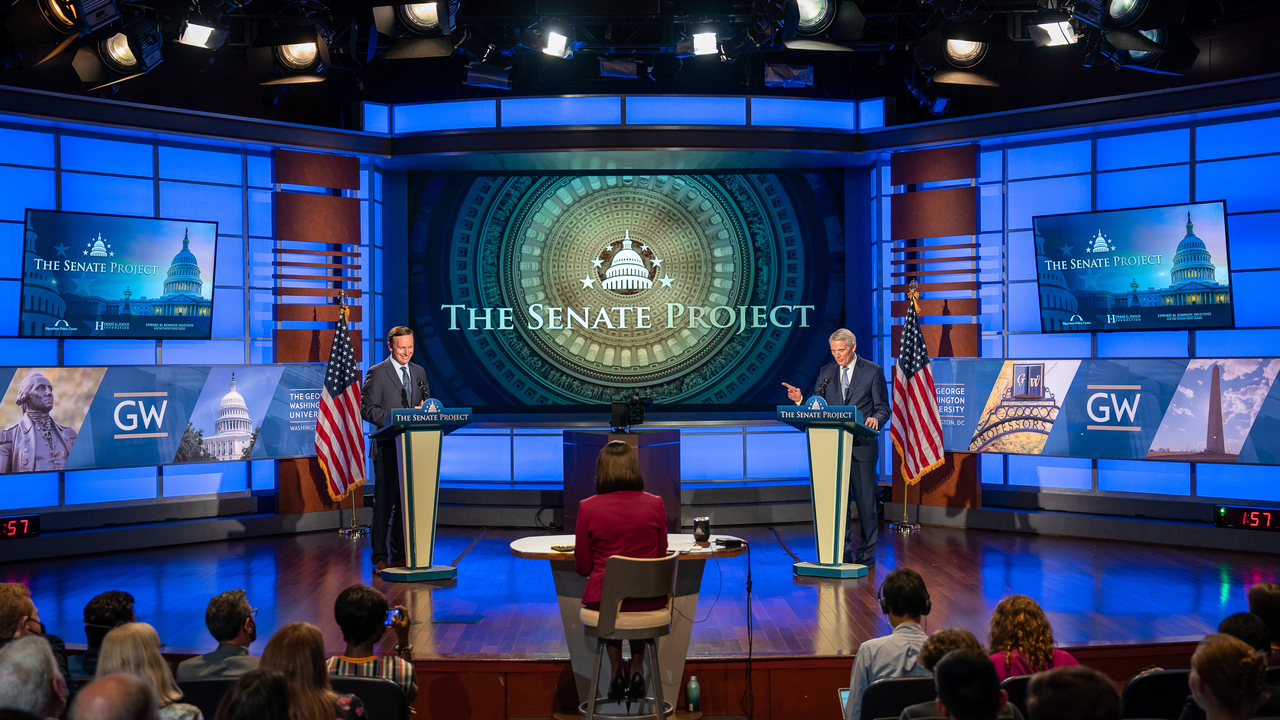 Sen. Murphy said that while he and Sen. Portman disagree on policy issues, they have worked together on many issues and passed legislation together. “I hope you’ll see both sides of the Senate today – spirited argument but a desire to reach common ground.”

On the topic of inflation, Sen. Portman stated: “As the economy majors in the crowd know, it’s all about supply and demand. The recent [relief] package … increased demand with the restriction of supply … I oppose the reconciliation bill primarily because it raises taxes during a time that we’re trying to get the economy back on track.”

“Inflation is not a uniquely American problem,” countered Sen. Murphy. “It is global because of our system of distribution… What we’re talking about [with the reconciliation bill] is the 200 most profitable corporations – we’re simply asking them to pay the minimum in corporate tax. Part of that will go towards deficit reduction … and we take the rest of that money and give it to consumers struggling to pay their bills.”

As the topic switched to gun control: “[The recent bill] is an example of how Congress can come together, but it’s just not enough. I don’t understand why we can’t have … universal background checks, and get these weapons of war off the streets. An AR-15 is not essential if you want to hunt or protect your home,” said Sen. Murphy.

“A lot of these horrific mass shootings have connections to mental health issues … A lot of these individuals are not in a position to get health. That’s why this issue is so important,” said Sen. Portman. “The other part that we don’t talk about is what happens every night in our nation’s Capital, and as Sen. Murphy knows we have one of the higher homicide rates in Cleveland. This is the gun violence we don’t hear about.”

As the issues switches to immigration: “I’m a big proponent for immigration…but we can’t continue to have the lawless movement of people across the border. But these numbers continue to grow,” said Sen. Portman.

“Senator Portman is right that the numbers are high this year,” said Sen. Murphy. They were also high in 2019 … they are higher today, in large part because of Title 42 process which turns people around and back across the border. So you’re seeing a quadrupling of people coming back … This debate cannot be about the threat immigrants pose against this country, it needs to be about the opportunity … to better our pathways.”

On working towards reaching consensus and common ground: “Despite how broken this institution looks from the outside, when you put together the acts, this is a pretty bipartisan Senate in terms of a 50/50 Senate … despite the debate we’ve had here I do have some hope,” said Sen. Murphy.

“We’ve passed some pretty good legislation. It’s never perfect … but I believe we’ve laid the predicate that there’s hope to be had,” said Sen. Portman.

The goal of The Senate Project™ debate series is to reintroduce the culture of seeking common ground and consensus that has been the essence of the Senate since it was conceived in 1789. In a time of deep political polarization in America—and a 50-50 split between Democrats and Republicans in the Senate—the objective is for the public to hear leading senators from competing ends of the political spectrum. The Oxford-style format of the 60-minute debate allows senators to engage in extended, thoughtful, wide-ranging debate while exploring areas of constructive disagreement and searching for bipartisan compromise.

Some of the remarks have been edited for clarity. For a full transcript please visit: https://www.c-span.org/video/?522049-1/senators-portman-murphy-participate-bipartisan-policy-center-debate