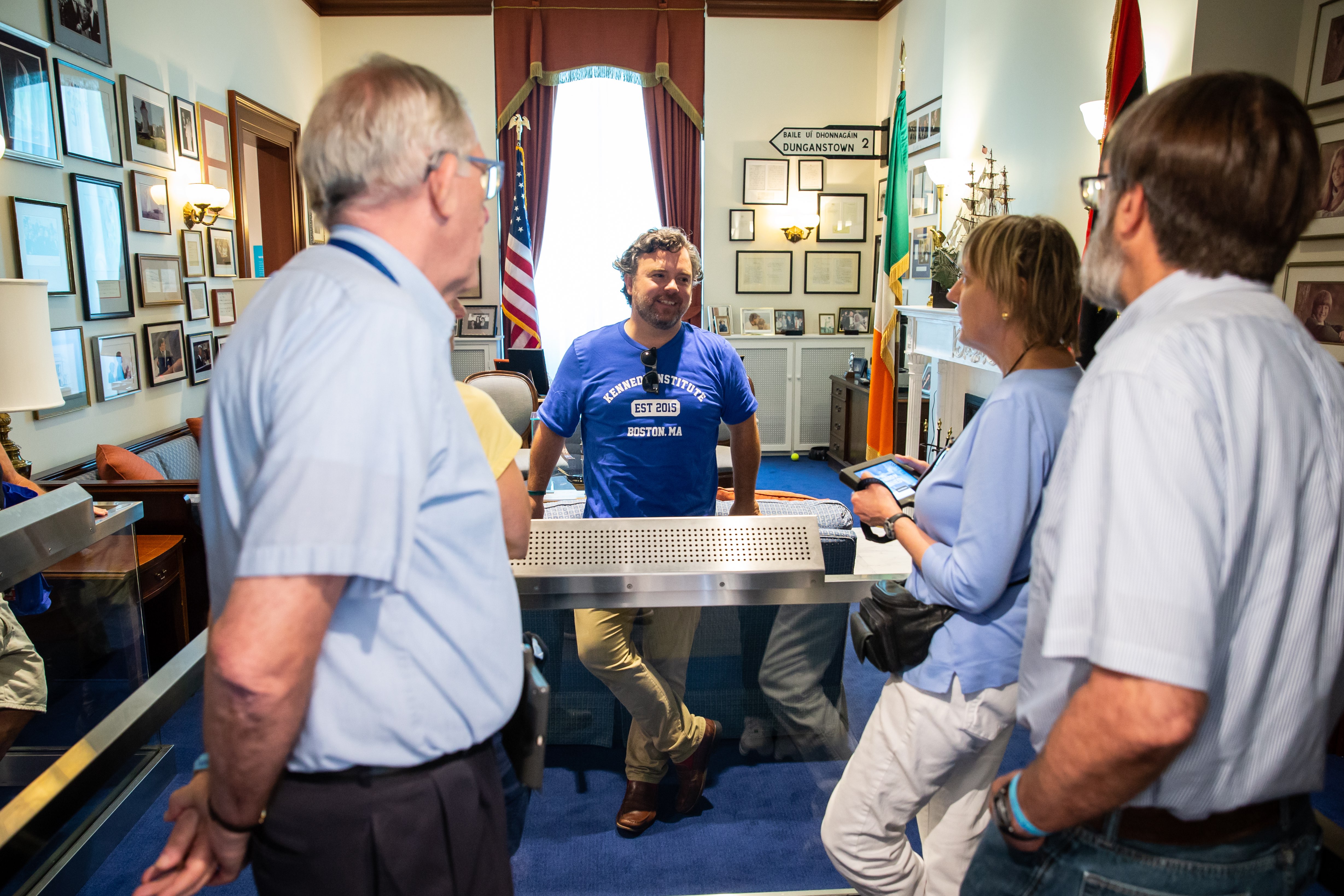 Steve Kerrigan speaks to visitors in the replica of Senator Kennedy’s office during Free Fun Friday 2018.

Senator Edward M. Kennedy didn’t just inspire me to live a life guided by service. He embodied what that means to me in a very real way.

I have always been taught that if you have the ability and the opportunity to make a difference, you have an obligation to try. That is what Ted Kennedy did every day of his life. I was lucky to witness his commitment to service first-hand for more than a decade in his office and for years after I left. Senator Kennedy believed that when you are called to serve there is nothing you shouldn’t do for the people you represent. There was no task too small or challenge too big that he wouldn’t try to make things better.

The Senator was incredibly proud to be a member of the United States Senate and not because of the title or the office, but because he believed it put him in a position to do good. He was fond of reminding all of us, including incoming presidents, that the Senate was created in Article 1 of the Constitution (the presidency wasn’t included until Article 2), but I would argue that some of his greatest work on behalf of people were not as a result of the judicious use of a power endowed on him through the Constitution but rather through the assumed power of service. He was a convener of ideas and a solutions-driven leader.

Some of the proudest things I worked on with him wouldn’t fall under any description of what is required of a United States senator. I call them the lines in between the lines of a job description. Nowhere in Article 1 is there any mention about standing up to corporations that contaminated communities and left them to die on the vine like General Electric did in Pittsfield, but Senator Kennedy was right there for years working on a consent decree that would allow for cleanup, remediation, and revitalization.

The Constitution says nothing about what a senator should do when murderers hijack aircraft and murder 2,977 people in a terrorist attack (including people from more than 200 families from Massachusetts). But there he was reaching out to the victims’ families on September 11th itself and saying “how can I help? I am here for you.” He developed a tragedy response system that included 38 federal, state, local, and NGO agencies to meet the horrible moment we were in. When the government response wasn’t sufficient, he formed the Mass 9/11 Fund and made sure those families all had the support they needed for decades more.

Article 1 is silent on the responsibility of senators when it comes to creating better pathways to learning for the children in their state. That didn’t stop Senator Kennedy when he realized that Massachusetts was 37th in the nation in networked classrooms in the mid-90’s. He put together an unprecedented effort with $50 million in donations and thousands of volunteers from teachers to electricians and everywhere in between to volunteer on NetDays and wire our classrooms to give the leaders of tomorrow a chance to learn. It took us 18 months and we moved to 12th in the nation. He contended that we would have moved to number one but we did so well that too many people noticed and started doing the same thing around the country.

The Constitution doesn’t require a senator to play chief negotiator in labor disputes, but when nurses were being forced to work mandatory overtime with unsafe patient ratios, he stood up and not just on the picket line with them but in the negotiating room to ensure that no for-profit hospital was going to push around front line health care workers. In fact, he went so far as to do the final day of negotiating at his office in Washington, D.C.

Ted Kennedy supported service. Not just the Peace Corps that his brother, President John F. Kennedy, created but programs like City Year and Youth Build and countless others who worked to address the needs in their communities. Senator Kennedy inspired me to always think of ways that I can make a difference in someone’s life. I don’t always succeed, as he didn’t either, but through his example I am proud for the effort.

I think of him every year when we plant 37,000+ flags in the Boston Common to honor the fallen service members from Massachusetts going back to the Revolutionary War. He knew that there was a need to support the families of fallen service members and he knew the government wasn’t doing enough, so he asked a group of us to create the Massachusetts Military Heroes Fund and, since then, we have served hundreds of families and raised and spent millions of dollars all to support our heroes’ loved ones.