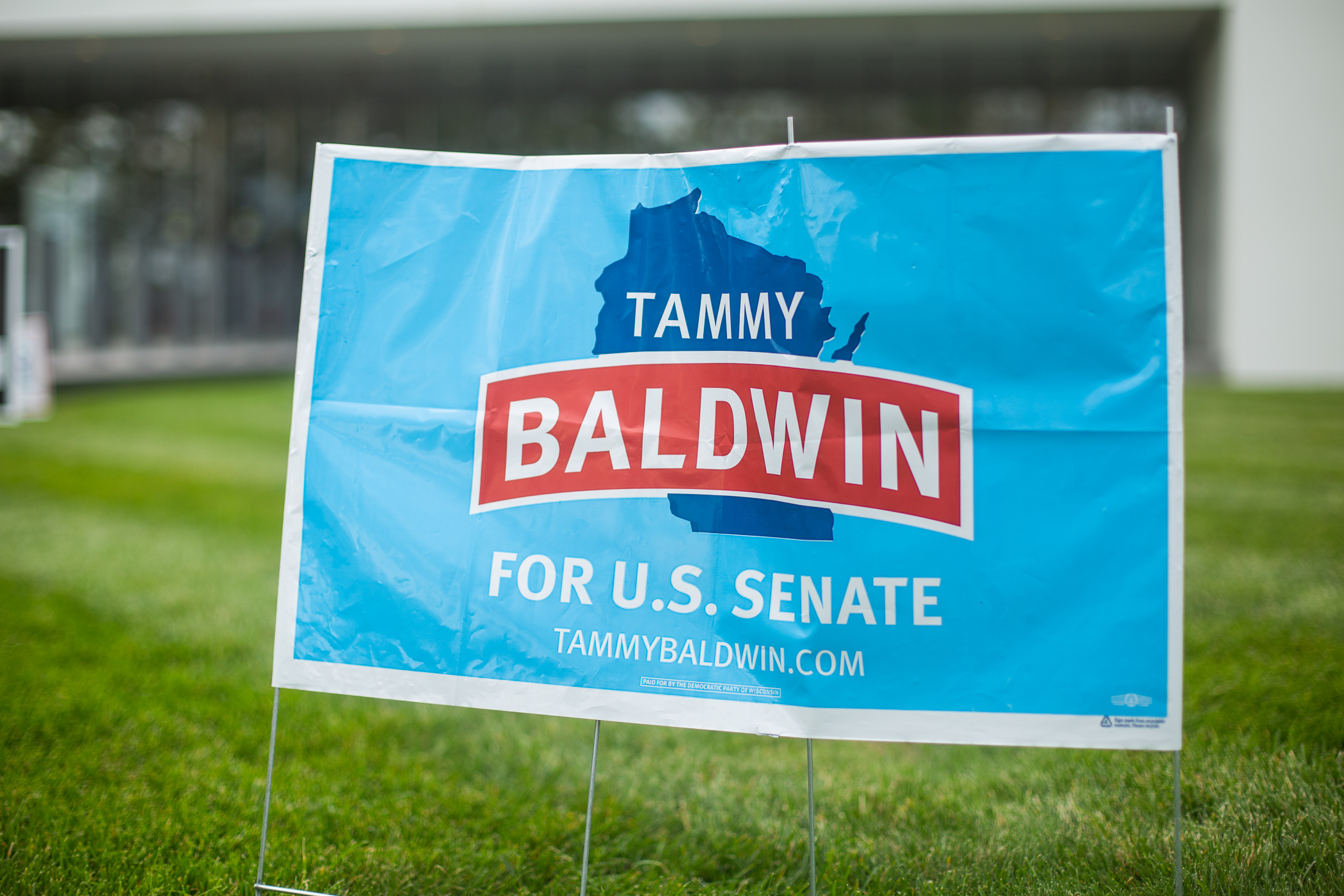 A campaign sign for incumbent Senator Tammy Baldwin of Wisconsin, along with other candidates for Senate, is displayed outside the Institute’s front entrance in 2018.

This month, the Kennedy Institute joins the nation in celebrating Pride and LGBT history with a Senate Spotlight on United States Senator Tammy Baldwin.

This quote from Senator Tammy Baldwin takes on great meaning and speaks volumes to some of the challenges that women face in elected office. Baldwin was frequently underestimated by her opponents and was counted out before she even tried, all because of who she was. However, she never doubted herself and used her voice to help improve the lives of others. The doubts and struggles she faced pushed her to improve legislation.

Senator Tammy Baldwin’s family experiences helped inspire her to pursue a career in public service. She was raised by her grandparents in Wisconsin. After a prolonged illness, her grandparents discovered they were unable to use their insurance to cover Tammy’s own medical expenses due to issues of dependency and her pre-existing condition. Baldwin saw her family grapple with paying bills and take on extra work in order to care for her. Later in life, she returned their efforts and became the caregiver to her grandmother. Her experiences with these everyday family obstacles gave her a different perspective and direction with legislation.

Senator Baldwin’s career in civic service and public office marks her as a notable “first” in several ways. In 1998, she ran and won a seat in the United States House of Representatives. With her election, she became not only the first female representative from Wisconsin, but also the first openly gay challenger sent to Congress. She continued to make history when she was elected senator in 2012, again as the first female senator from Wisconsin and as the first openly LGBT person in the United States Senate.

Senator Baldwin’s childhood experiences helped focus her legislative agenda on youth and families. While in the House, she helped draft the Patient Protection and Affordable Care Act, and worked to improve health insurance access for young adults. She also strived to make higher education more accessible and affordable. Since her move to the Senate, she has continued to fight for young adults on the issues of education and health care, but has expanded her impact to legislation on STEM programs, veterans, active duty military and their families, and strengthening the middle class.

Senator Tammy Baldwin has always used her experiences growing up in Wisconsin to motivate her work for her state and the country as a whole. I want all visitors to the Institute to understand how her accomplishments, strength of character, and fearless pride of self have helped to serve us all. Her words remind us that we are all responsible to make the difference we want.